What if you never had to take the bus or subway to work again?

Melbourne, Ottawa, Detroit and most recently Paris, are just a few of the cities around the world looking to reduce their carbon footprint and increase quality of life by transforming their urban centers into “15-minute cities".

The idea is based on four principles: proximity, diversity, density and ubiquity.

Urban planners approaching the philosophy believe that every neighborhood should be able to fulfill our basic needs within a 15-minute walk or bike ride.

Sounds great, but is this possible given our current roadways, architecture and employment habits?

To find out more, I spoke with the advisor to the Mayor of Paris, Carlos Moreno about "hyper-proximity". 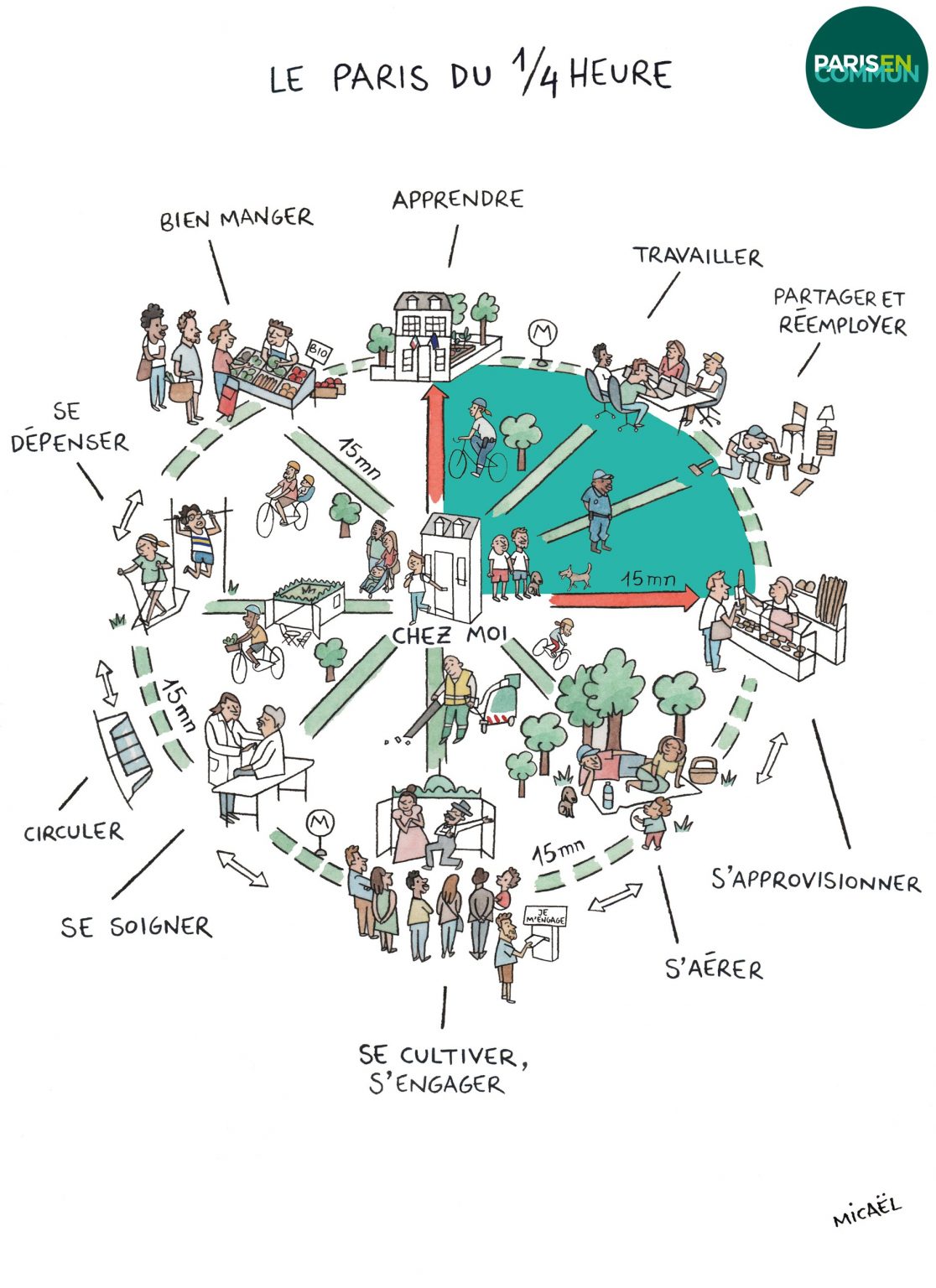 A new solidarity in 15 minutes

Inspired by the humanist view of Jane Jacobs, Moreno has spent much of his life's work investigating how to create healthy urban infrastructure, “…the city is alive…if we want to solve problems in cities the most important point to consider is humans, people, at the center of activities..."

For Moreno, the solution arrived in 15-minute intervals, or neighborhoods to be exact. Each of which must fulfill what he says are our six basic social functions: living, working, supplying, caring, learning and enjoying. He believes that if our needs are met closer to home, we will be happier, more willing to protect our communities and able to form better relationships.

This concept is in direct contrast to the social planning of the past 100 years which separates residential from business, retail, industry and entertainment.

The categorization of space made sense at the beginning of the industrial revolution when pollution from factories posed serious health risks. Then suburbs dominated by cars emphasized the split, leading to years of less-than-flattering big-box strip malls, intimidating industrial areas and isolated offices.

Now with Hidalgo and Moreno's insight, each of Paris' arrondissements will have all amenities accessible by foot or bike; “not to wage a war against cars", as Moreno puts it, or “build a Louvre every 15 minutes" but as a way to help shift priorities. Moreno explains:

“In Paris, 66% of the public space is streets for cars. But individual cars move only 17% of the population. And each one of the cars, we found, have only 2 people in each car. This is totally opposite to the concept of hyper-proximity."

Public transportation as a road map for change

At first glance it might seem that there's little need for subway, bus or streetcar in the new plan. But upon closer inspection, using public transit is actually key.

Moreno believes that city planners have a responsibility to create opportunities that will enable others to make changes, including how we commute:

“We continue to work in the same conditions as the end of the 20th century. However, we can make radical transformations with the impact of the digital [technology], with the impact of the new economic services. In this case, [The City of Paris] can promote dialogue with the corporations to encourage them to transform their work style and to propose to reduce the right of presence of their people in physical [work]spaces—a new distributed model for working… I think it is a new road map for creating a new balance, for job proximity."

Urban living is about how much time spent and where. When all services (eventually even jobs) are within a short distance, it will not only reduce pollution from car use, but also decrease the time it takes citizens to complete everyday tasks like going to work, resulting in space for activities like community engagement.

Cities such as Paris that take a leap and ban cars from core centers to create additional green space, are helping to promote these new behaviors.

More importantly, 15-minute infrastructure presents the possibility for businesses, small and large, to step in and offer their own incentives. By way of leadership, urban planners can encourage corporations to offer telecommuting options, subsidize transit passes and eventually, move their headquarters closer to families.

15-minute systems are also a great opportunity to implement automated vehicle services as a way to reduce the number of cars on streets; a primary concern.

When cities prioritize public transit, cycling and walking over driving, tools like HERE's Transit and Maps will be essential. “Hyper Proximity" isn't about increasing urban density, it's about being multimodal and a having a city that compliments those systems.

How many minutes is your city? Try HERE Technologies Routing, Transit and Advanced Maps for efficient multimodal transportation.

*Carlos Moreno is Associate Professor at the Paris IAE-Pantheon Sorbonne University in France, and co-founder and scientific director of the ETI Chair Entrepreneurship – Territory – Innovation.