Skip to main content
Sign up
Contact us Sign up
Popular searches
Partners
Partners
HERE360 blog
It's official: your burger and fries will soon by cooked and served by robots
News & Trends 9 min read 21 January 2022

It's official: your burger and fries will soon by cooked and served by robots

It might sound like something from a futuristic movie, but fast food robots are coming to a restaurant near you.

As you sit down and wait for your order in the restaurant, you hear the sizzle of french fries being cooked in the kitchen. Minutes later, your lunch is served to your table by a robot that knows exactly where you're sitting and what your order was.

Meanwhile, in the kitchen, the chef has been replaced by a robot, too.

As COVID hits the hospitality industry hard, companies are turning to a reliable, virus-proof army of robots to cook and serve your food — and unlike humans, they won't get hit with the illness that's been crippling the industry. As far away in the future as this might all sound, you're likely to be served by robots imminently.

The National Restaurant Association recently reported that four in five establishments are understaffed at the moment, but one company that's coming to the aid of the service business is Richtech Robotics, a company based in Las Vegas and Austin. Designs in Richtech's arsenal include the "Dust-E" robot, which cleans and disinfects floors autonomously, and the "Richie", which delivers room service to guests' bedrooms in hotels.

These robots use location technology to navigate their way around busy spaces and help keep businesses moving. The jewel in the crown of the company's products is its new fast food-serving "Matradee" robot. The Matradee uses indoor positioning, which allows it to deliver dishes straight from the restaurant's kitchen to customers, before carrying empty plates back to the kitchen. 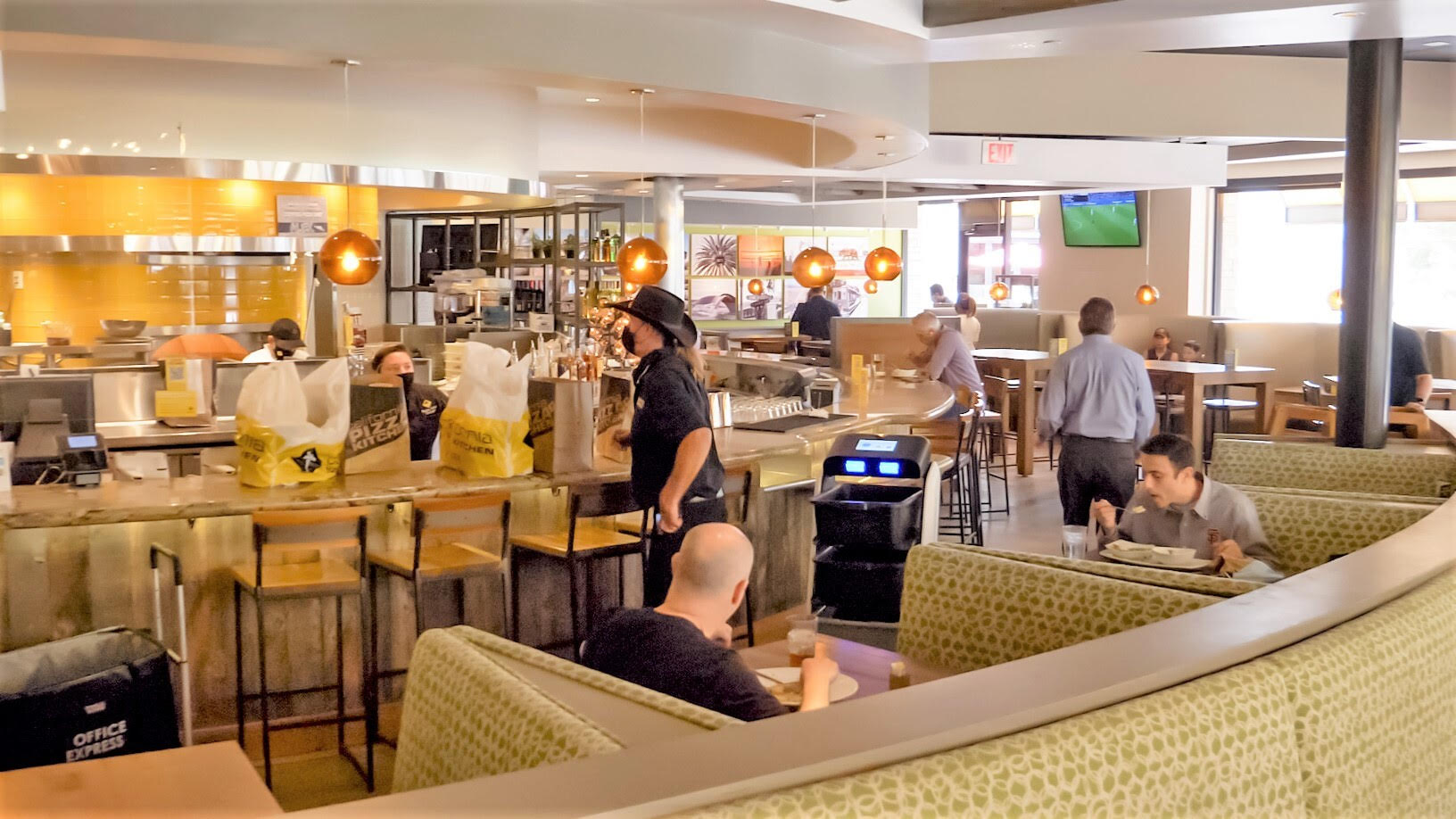 The Matradee is capable of scanning its surroundings to avoid bumping into people and obstacles while it travels on its own. Image credit: Richtech Robotics.

The robot boasts reaction time within a fraction of a second, which is essential in a hectic restaurant with customers walking around. The Matradee costs up to US$20,200 and has recently been tested out at California Pizza Kitchen where it was a hit with customers.

And while the Matradee is busy doing the serving, human staff can get on with interacting with customers face-to-face, including making restaurants more profitable by upselling special menu items.

Phil Zheng, Chief Operating Officer of Richtech tells HERE360, "Being a waiter is not an easy job. Right now, restaurants — and in fact, many types of businesses such as hotels and coffee shops — are struggling to recruit and retain staff, which has been sped up by the pandemic. Staff get sick and pass COVID onto other staff, so Richtech has been looking at what we can offer business as a long-term solution to this problem. This is where our Matradee robot comes in. It doesn't get ill or transmit COVID, and it's been designed as an assistant to restaurant staff, to alleviate some of the everyday stresses and strains, such as carrying large volumes of plates.

"As kids, we've been raised on movies such as Terminator, and robots seem scary and dystopian, so there's a lot of hesitation around them. But our technology is designed to assist, add efficiency for businesses and make life easier for staff." 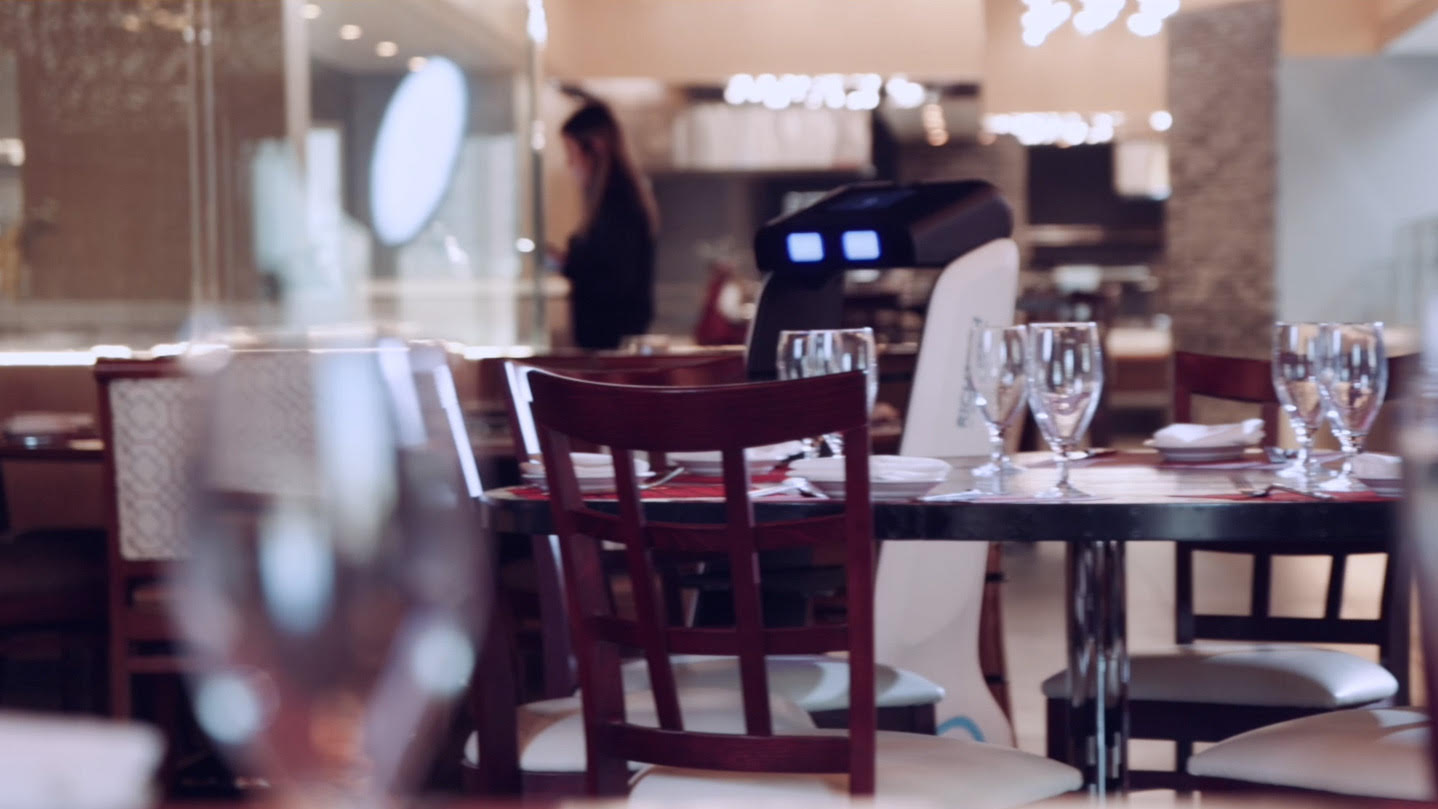 Customers can expect to see robots like the Matradee at a restaurant near them in the near future. Image credit: Richtech Robotics.

Phil reveals that the robots also make service quicker. "Nobody wants to walk into a restaurant and wait 30 minutes for a burger, and our robots alleviate that. And we've found that once they're running in restaurants, both customers — especially kids — and workers love having them there."

The Matradee has so far been seen on the floor at California Pizza Kitchen, and Phil points out that there's a whole host of big names in the restaurant signed up to run the robots in the future. Though they're under a strict NDA for now, you can expect it to be sooner rather than later that a robot is at the front of the house serving you fast food.

The trend is confirmed by other robotics companies getting involved, including Flippy 2, a robot by Miso Robotics that works in the kitchen as a chef, frying food like chicken wings.

Indoor positioning technology isn't just used by the new generation of fast food robots. Studies have found that in Europe and North America, humans spend 90% of their time indoors, so when you're using location technology, why should the journey end just outside your building of choice?

Robin Hoffmann, Product Manager Indoor Location Services at HERE explains: "HERE offers indoor positioning, making indoor mapping an extension of its outdoor maps so that locations can be found indoors as well as outdoors for door-to-door routing. This means you can navigate right from your front door to the exact spot within the building of your destination — be it a parking space, a boutique in a mall, an airport check-in or a room in a hotel."

The tech isn't just for way-finding - it can also be used to help speed up the supply chain as it enables the fast and accurate locating of goods and assets.

Joseph Leigh, Head of Product Management at HERE, says: "Indoor mapping can also be used by businesses for enabling the fast, highly accurate location of assets indoors, such as forklifts and machines. Indoor positioning can also be used to help locate shipping containers in a warehouse, to help alleviate and accelerate the supply chain and get goods moving more quickly around the world. We also offer geofencing, which triggers an alert if an object comes within a certain distance of another object, which means it can also be used for safety."

Phil adds that indoor mapping — and with it, robotics — will boom in the next couple of years in ways that we can only see as fantasy right now. But it's coming and sooner than the public realizes.

"Automation was a mega-trend even before the pandemic and has only been sped up by the fallout from COVID. By 2023, we'll see robots working in public spaces across the world," Phil says.

At the start of the pandemic, London's Heathrow Airport began using robots to disinfect areas that are deemed high risk for COVID such as handrails, security trays and elevator buttons to encourage consumers back to air travel.

And in December 2021, robots were put to work in Cincinnati/Northern Kentucky International Airport delivering food to customers who had ordered it via an app.

"It won't just be airports where we see robots," Phil adds. 'They'll also be used to assist elderly people in ways that a nurse might do now, with sending out prescription drugs, cleaning in shopping malls, and they'll even be serving drinks in bars, where customers will be able to order a drink via voice recognition. In the future, I think we can expect robots to deliver us our coffee, right to our homes, almost like a dumbwaiter that arrives at your front door."

While it might sound like something from a movie, it seems that this futuristic tech is about to knock right at our doors.

"Think about it — if flying cars became mainstream, then it'd be weird at first, but after two or three months, as with any invention, as a society, we'd get used to it. And it will be the same with robots," Phil says. As long as our coffee and food are hot and timely, we're here for it.