Expert takes on Beck: the meaning of the underground

Expert takes on Beck: the meaning of the underground

The world-famous Harry Beck map of the London Underground has become an icon of the city. Breaking through its boundaries as a simple transport map, Beck’s diagram has come to symbolise London to people across the world.

But what sort of city does it represent, and what world views does it communicate? Every map is a world view. It shows ‘what’s important’ and fails to show things that are ‘irrelevant’.

We asked nine of our writers and friends for their interpretation of the London Underground.

First up, our resident historian, CJ Schuler, explains how the map came to exist:

"From the opening of the District Line in 1863, the various railways that eventually made up the London Underground issued their own maps, depicting their lines and stations on a conventional geographical background.

"The different lines were first combined on a single map in 1906. 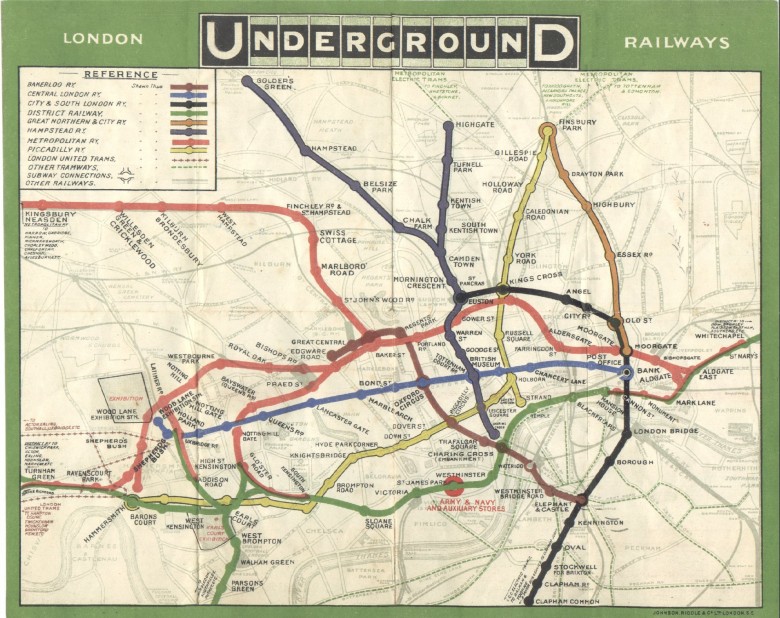 "This still adhered to the geographical principle, which made it large and unwieldy – useful for pre-journey planning, perhaps, but impractical to open in a crowded carriage or on a windy platform.

"It was Harry Beck, an electrical draughtsman, who hit on the idea in 1933 of showing the Tube network in the same way as a circuit diagram. He understood that the surrounding geography, the curves of the tube lines, and the exact distance between stations were irrelevant to most passengers; what mattered were the connections. His design was rejected at first as being too radical, but when it was tested on the public it proved extremely popular, and has formed the basis of the London Underground map ever since." 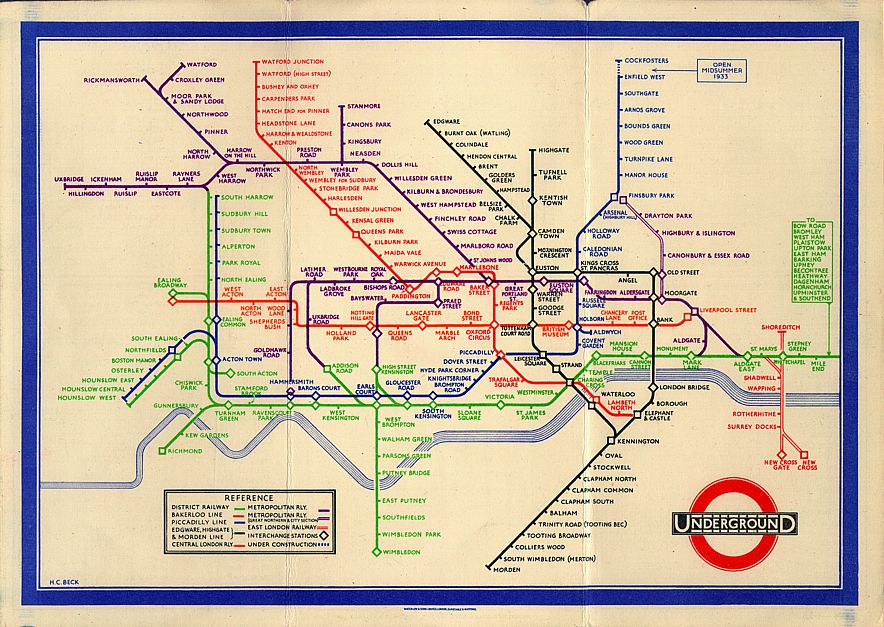 " Beck Map 1933" Licensed under Fair use of copyrighted material in the context of Harry Beck" href="//en.wikipedia.org/wiki/File:Beck_Map_1933.jpg">Fair use via Wikipedia.

Jug Cerovic has been working on redesigns of the world’s transit maps. His take on the historic map is that, “Less is more”:

"Beck’s map successfully conveys the whole complexity of the tube network while at the same time it remains understandable and memorisable by everybody, even without a key.

"This is due to a careful selection of the information shown on the map where every redundancy or unessential feature is discarded resulting in only lines, stations, station labels and the Thames remaining.

"Nevertheless, the complexity of network itself is not reduced, as much as a user is concerned all necessary information is still portrayed, it is the representation of the network that has been efficiently simplified. The resulting work is a symbiosis of form and function." 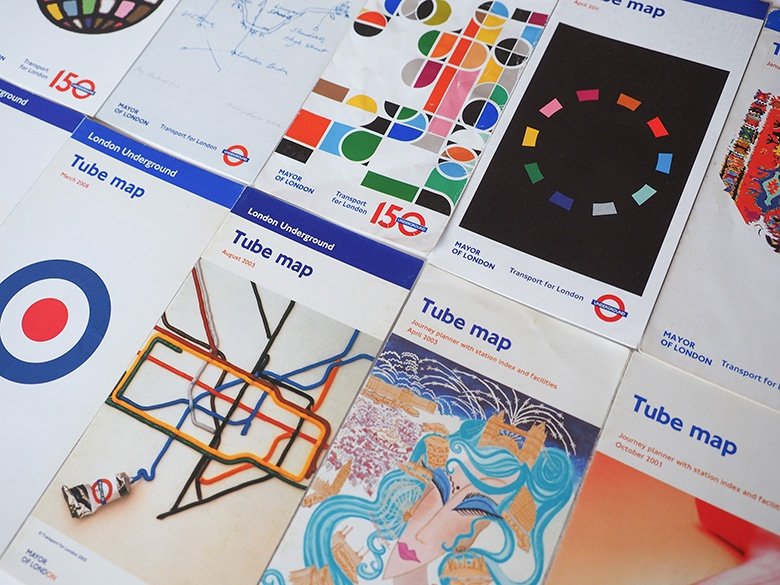 Transit consultant Jarrett Walker respects the map design, but is much less a fan of the tube network it describes:

"Beck’s map taught us to see the internal logic of transit networks, but I often tell other cities that they don’t need Beck’s rules, because their network isn’t the confusingly branched mess that London’s Underground is.  The District Line should be called the District Spider, whose body lurks at Earl’s Court, while the Northern Line should be called the North-South Latticework.

"By contrast, the simple Paris Métro was never hard to navigate with geographically accurate maps. The next step in maps will be clear indications of frequency. When a line branches, for example, the branches should be half as wide."

Peter Curry is half of the brains behind Mini Metro and acknowledges that the game’s appeal would not be nearly so strong without Beck:

"Coloured lines running at 45° angles, the shared language of the commuter from Marble Arch to Long Ping. The lingua franca of underground travellers. Such a resonant entry in the collective zeitgeist has allowed Mini Metro to tap into Beck's design to gain instant understanding from gamers and non-gamers alike, the world over. The eyes light up, "I'm building the red line!"

"Dinosaur Polo Club joins the ranks of those indebted to Harry Beck."

Our own transit guru at HERE, senior product manager, David Volpe, recognises the debt that our own maps owe to Beck:

"We have successfully compressed our world into mere gigabytes of information. These binary representations of streets, addresses, and places link infinitely into an increasingly complex context within a multitude of unseen clouds of data. With this unfathomable amount of detail comes an equally immeasurable need to simplify its visualization.

"But more than 80 years ago, this need for simplification was recognized whole-heartedly by Harry Charles Beck. Beck invariably revised the way that the London Underground is referenced, interpreted, and utilized by upwards of 1 and a quarter billion public transportation riders every year. It is safe to say that Beck's visualization of the Underground has set a standard for schematic representations of complex networks - helping bridge the widening gap between complex spatial data and elegant everyday usability."

Pino Bonetti, editor-in-chief for HERE 360, recalls early memories from the depths of the Italian countryside:

"I saw London's tube map for the first time in an English textbook. Chapter 3: Getting around town. When Mark and Jane decided to meet at Hyde Park Corner to go for a picnic, I was being fascinated by the complexity of London's underground system. I was living in a remote village in the Italian Alps and I was seriously wondering how Londoners could ever possibly remember all the lines and stations. It looked like an impossible task to me. Over time I appreciated the power of Beck's map: no one is required to learn everything by heart. The 'red one' goes from left to right, the 'brown one' goes from top left to bottom right, etc. After a couple of rides you figure out how the system works and you don't look like a lost tourist anymore. Except for the Northern Line: can someone explain it to me?"

Georg Gartner, president of the International Cartography Association, reminds us that one of the map's principal virtues is its marriage of form and function:

"A map which is so influential that it is recognized globally as somewhat like a trademark, inspired cartographers as well as graphic designers, is printed on t-shirts as well as on hats, and basically helps millions and millions of passengers to find their way in a mega city like London is somewhat special.

"Beck's representation of the London Underground is such a unique map. It is unique because it combines form and function. It is a masterpiece of design in terms of harmony and aesthetics while at the same time is functional in terms of usefulness and efficiency."

And lastly, one thought from me - I wasn't going to miss out on the chance to share an idea in this post:

“Beck’s map foreshortens the city. Everything can be seen in a space that can be clearly printed on an A5 sheet of paper. In reality, stations on the branches can be several kilometres away from one another. Yet the same even spacing distance applies to stations closer to the centre that, on the ground, are only a couple of hundred metres away from each other. It makes London whole, an organic and integrated body politic. It reinforces a view of the city as one place. Other perspectives might see something far more disjointed.” 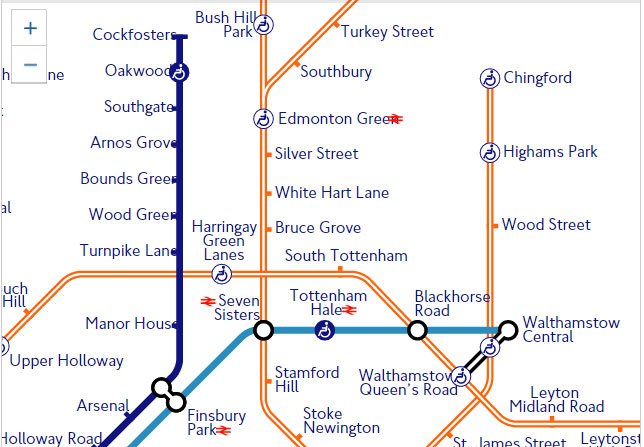 The latest (and largest) version of the London Underground map is now live on the TfL site.