Paving the way – the world’s most cycle-friendly cities

Paving the way – the world’s most cycle-friendly cities

Looking at global sales in street bikes, mountain bikes, e-bikes and bike share programs, it’s evident that the bicycle business is booming. But, what cities are best setting themselves to suit this swell of cyclists?

The call for us all to live greener, healthier lives has been strong for several years running. If you’ve heard that call, and you’re anything like me, it holds appealing proposition: a cheaper commute, some daily exercise, and the satisfaction of aiding the environment.

The sales of bikes, and memberships with bike shares has flourished across the globe. However, there are still common fears that prevent people from adopting a two-wheel transportation into their daily or even weekly routine.

Between those fears, and the lack of convenience, it’s up to the city to enable those that want to go green and healthy – and those city infrastructures face 3 challenges:

With those challenges in mind, here are some of our favorite cycle-friendly cities, and the solutions they’re building.

Copenhagen is known for its carbon neutral plan, and bicycles play a big part in their effort to reduce emissions. The city reports that a full third of Copenhagen residents commute to work by bicycles – enabled by more than $150 million spent on cycle-focused roadway improvements over the last ten years. One example is the Cirkelbroen Bridge, a bike and pedestrian-only bridge designed by Olafur Eliasson, and funded by public and private entities.

Copenhagen has confronted the mixed traffic issue by focusing on bike-friendly and bike-only options – to the tune of 350 km, more than 217 miles of bike-only paths and lanes. Bicycle lanes on most streets are elevated from the main road, making it extremely difficult (if not treacherous) for cars to casually cross over bike lanes.

To entice would-be cyclists with convenience, the city has constructed/converted 16 bridges that are bike and pedestrian only. You can rent a bike from the city for about €3 an hour. City trains have special cars made for cyclists to bring their bikes. In short, the city leads the list for making cycling the easiest, cheapest and fastest way to get around. 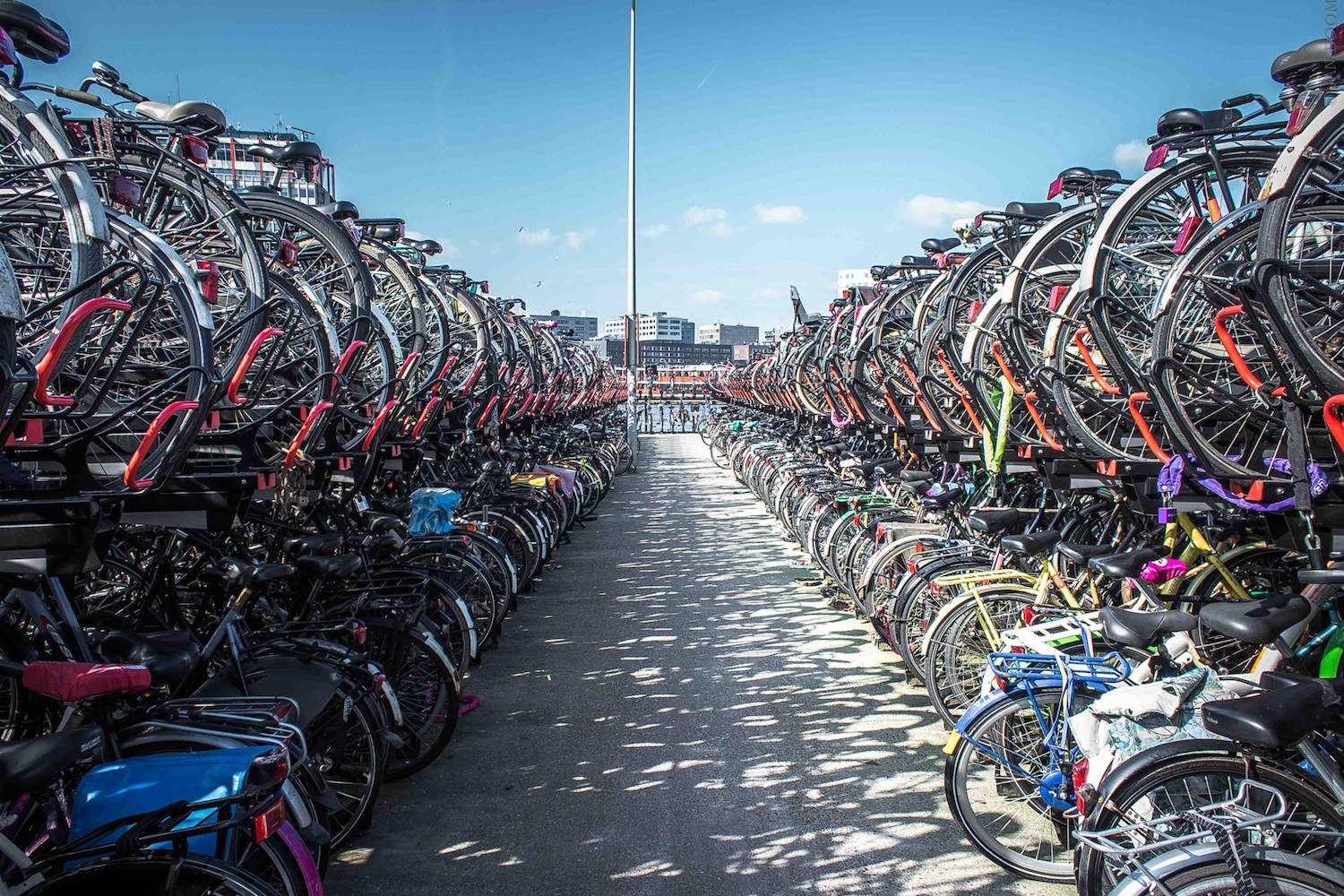 Consistently ranked as one of the most cycle-friendly cities in the world, the citizens of Amsterdam are already deeply accustomed to using bikes as their primary mode of transport.  In fact, it’s estimated that there are 4 bikes for every car, and 60% of inner-city trips are made on two wheels.

Like other cities, in order to entice residents to use bicycles, the city has developed such that in the decision between travelling by bike or by car, the bike is the more convenient option. Although, Amsterdam is actively confronting an issue that other cities are only beginning to understand: where do all those bikes go?

Due to theft and vandalism, the city has built multiple public parking facilities, and plans to expand those parks to more than 215,000 parking spots by 2030. The bike parks are free for an hour, and have a small charge after that – though most residents purchase year-long passes so that they can come and go whenever they need.

Aside from the bike lanes and their large bike share program, part of what makes Barcelona so bike friendly is the year-round moderate temperatures and more sunny days than not over the year.

But Barcelona has committed to reducing its traffic-ridden streets by 21%, and bikes are a big part of that effort. The bike share company bicing has more than 6,000 bikes available across 420 stations, and claims to cover more than 70% of the city.

In recent years, city planners have committed $32 million euro to expand bike lanes to cover more than 190 miles of road, and create more than 30,000 legal parking spots for cyclists.

Of course, there are many more to list. Cities across the world are taking on the challenge of enabling bike commuters, following in the footsteps of those that have both succeeded and failed before.

Chicago’s Loop Link separates the downtown area between cars, buses, protected bike lanes and pedestrian sidewalks. The city of Utrecht invites residents and visitors alike to travel by bicycle, and is building the biggest bicycle parking facility in the world. New York is finding room for bike share stations well into the outer boroughs, and is beginning to focus on bike lanes.

So, how about you? Ready to get to work on two wheels?