How exploding electric cars could save your life

How exploding electric cars could save your life

High-voltage battery packs means electric vehicles pose particularly unique problems if they crash. But Bosch has come up with a simple solution that might blow your mind.

Electric cars are fast. Often astoundingly so. Some models can even accelerate from a standstill to 60mph (97kph) in less than three seconds. That's quicker than most supercars off the blocks.

And according to French insurer AXA, this acceleration could be one of the factors behind a spike in electric car crashes. Its data shows that high-performance electric cars are 40% more likely to crash than a conventional car.

For the occupants of electric cars – and the first responders dealing with the aftermath – this poses a particularly unique issue. The risk of electrocution.

The problem is that if an electric car crashes there's a risk its high-voltage battery could give you a sizeable shock.

Of course, car makers have thought of this and built in a failsafe mechanism that cuts power to the batteries and stops the spread of electricity in a split second.

And therein lies the issue. If the wiring is damaged in a crash it might prevent the car from cutting the power, allowing electricity to leak into the surrounding bodywork. And with between 400 to 800 volts of power in the average electric car battery, that's a very dangerous scenario if you come into contact with it.

Electrocution isn't the only concern either. If an electric car catches fire, its lithium-ion batteries are extremely difficult to extinguish, as some police officers in Florida discovered when a Tesla crashed and burst into flames early this year.

Bosch, however, has devised what might sound like a rather extreme answer to the problem – but it's one that could save your life. An explosion. Or rather, a series of mini controlled explosions.

The idea is that when the airbags go off a 'pyrofuse' triggers a series of small explosions in the car's electrics, severing the link with the battery and isolating the dangerous current. This prevents the risk of electrocution or fire. It's the same technology that's been used for decades to set off your car's airbags. The pyrofuse can even be retrofitted into existing electric cars fairly easily. 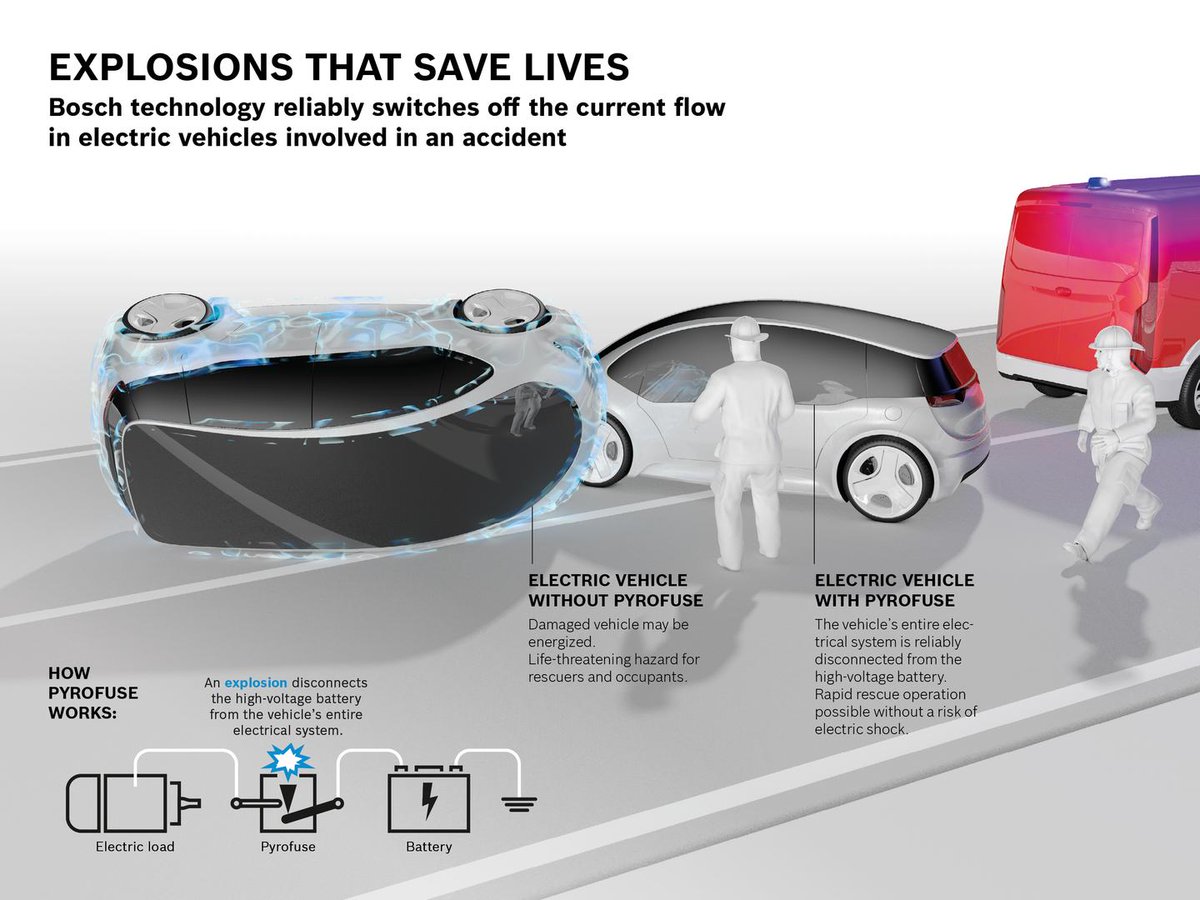 It's a simple solution to a complex problem - and like all new technology, it's innovation and clever thinking that will drive the next revolution in mobility.

At HERE, we're working on the next generation of safety systems to help prevent accidents. Our latest tech, like HERE Hazard Warnings, alerts drivers to hidden danger ahead, making roads more predictable and safe.