Skip to main content
HERE360 blog
Interactive ads are getting smarter, they even know when you're looking at them
7 min read 14 January 2020

Interactive ads are getting smarter, they even know when you're looking at them

While advertising methods have changed, the goal is the same. Interactive ads allow businesses to engage with individuals and, possibly, expand social awareness.

Advertising was once quite simple; just find a brush, a can of paint, a decent piece of plywood and someone with a knack for naming.

With modernization came electric lights, cars, highways, and a shift from identifying with the populous to identifying as an individual. And, along with the increased density and visual “noise" of urban centers came advertising's biggest challenge: getting noticed.

This equates to more than accommodating short attention spans and increasingly flashy signage. Companies want to be relevant; they need their ads to reflect the ever-changing technological landscape faced by their consumers. But it's not always so easy.

Advances in technology shift both the form and content of advertising. From the inside technology like location based-services and real-time mapping encourage companies to make their ads more personal and relevant to their audience. From the outside, the speed, frequency and method with which we devour ads requires constant shifts in scale, sound, pace, aesthetic and mode of delivery. 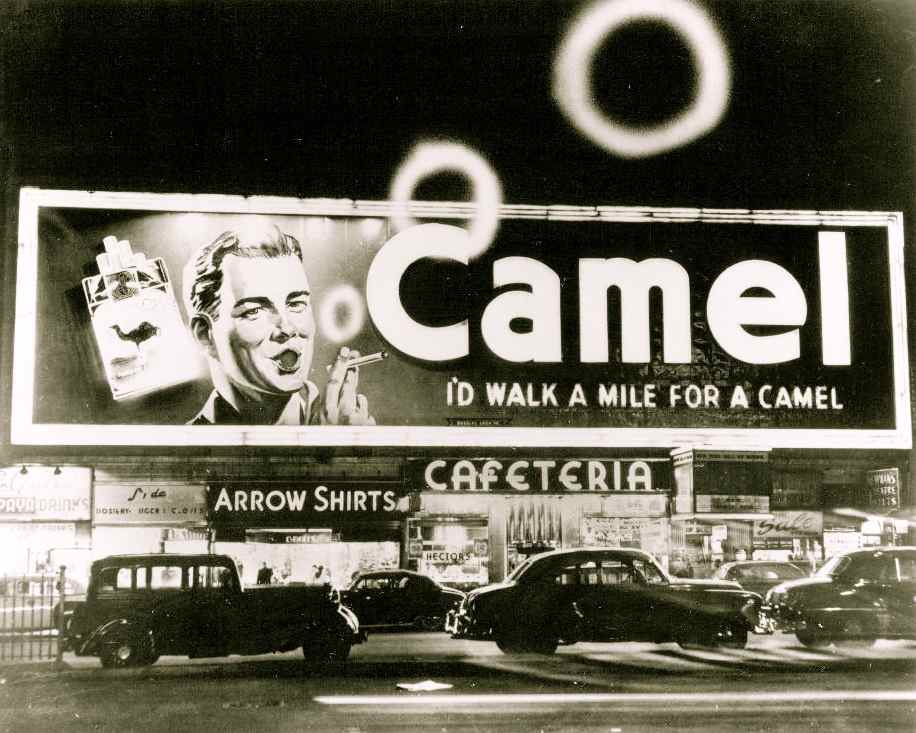 This Camel ad, one of the first to use moving components, was so effective it remained on Broadway for twenty years.

From self-made ads, hanging signs designed to swing into your sightline as you walk by, neon signs, giant ads with 3D elements and digital billboards that "move" to employees wearing television screens as backpacks; brands have to continually "up their game" if they want a response.

Welcome to the era of interactive,  location-specific advertising.

Cities are a cacophony of letters and symbols. Even in 1835, actor John Orlando Parry described A London Street Scene as a slew of messages; one day's ads plastered over another like geological strata.

In those days, nightfall was advertising's biggest impediment. With the implementation of electric light in 1880, it became possible for businesses to advertise at night. Electric signage not only allowed brands to stay memorable, it also helped pave the way for something called “night life".

As technology advanced, more complex methods of holding our interest continued to unfold. Who remembers the Camel sign that blew four-foot smoke rings on Broadway between 1944-66, or Seattle's 1970's tourism campaign that boldly declared, “Get High With Us" alongside a technicolor image of the Space Needle? How about the 1981 Macintosh computer ad that begged, "Will someone please tell me what a personal computer can do?"

They might seem hokey to you now, but those ads succeeded in making people notice brand, location and progress.

Operated by a computer that changed the image every few seconds, the first digital billboard was installed in the USA in 2007. Nine years later the OAAA reported approximately 6,700 digital billboards in the US alone.

Because digital billboards use moving images and light, and we like this for the same reason we can't take our eyes off a television in a bar; it's highly distracting and entertaining. In fact, 76 percent of consumers have entered a shop because of captivating digital billboards. An additional 75 percent told friends about a store simply because they were impressed by the signage.

But unlike moths, we've grown accustomed to the millions of moving images at our disposal, and in our pockets. Now, companies require more sophisticated technology.

Twitter wanted to make sure their messages were received, so they blew up some Tweets up and put them on NYC billboards. (Image credit: TheDrum.com.)

Ads about you, at a specific time and place

Companies use location-based services to collect information from the apps on your phone. They use the data to customize ads based upon your current location and interests. In real time.

While we're pretty much used to location-based ads that answer our unofficial requests for dining recommendations or ski gear, other companies are trying out different strategies that involve more direct interaction:

This futuristic advertising is based upon kinetic facades in architecture that permit ads to transform on demand, kind of like the holographic messages in the film Minority Report. Synaps Labs is already designing billboards that adapt to specific models of passing cars, and of course, their drivers. 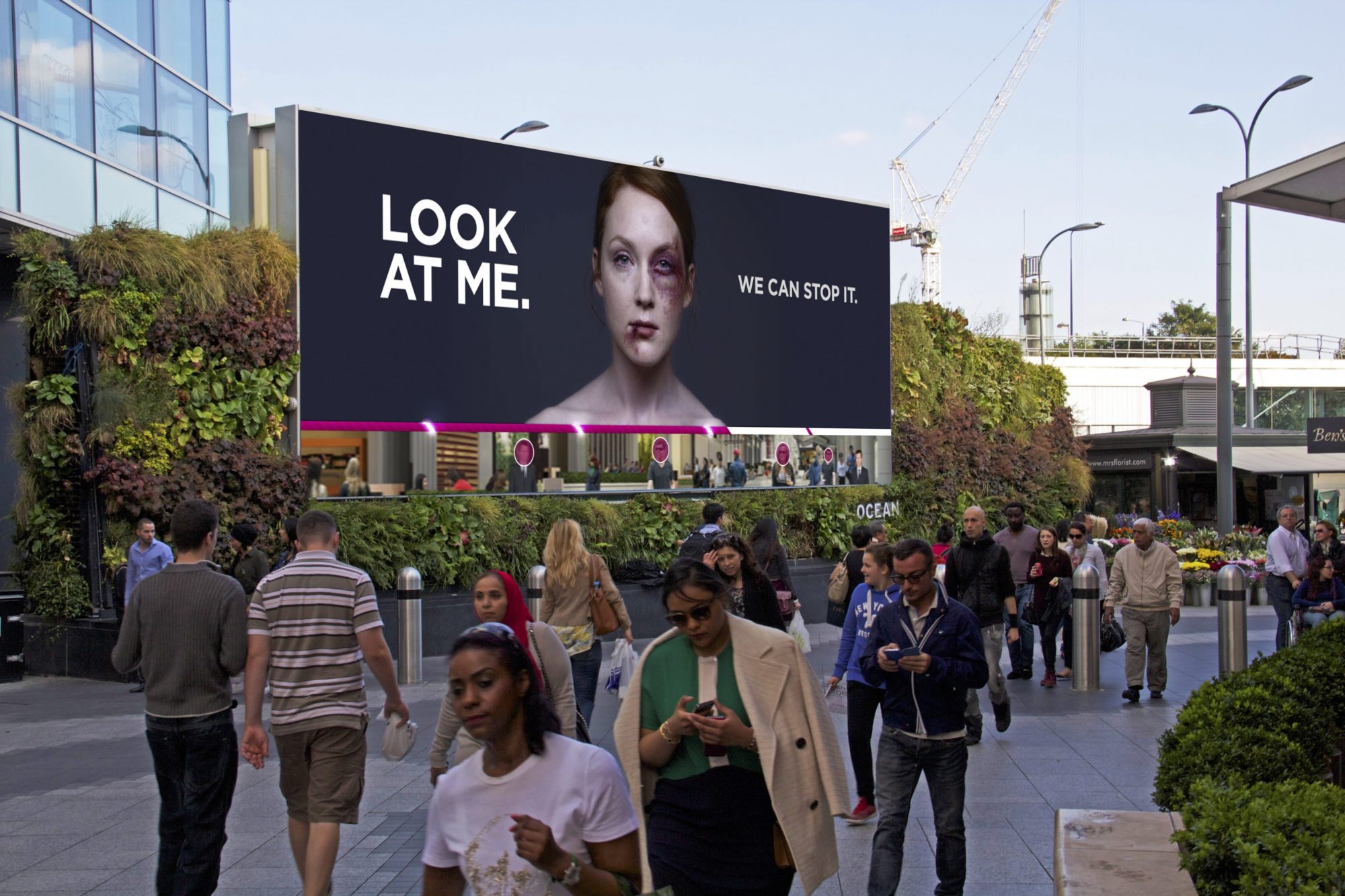 Companies will get more attention with interactive ads: bonus points for those geared towards increasing awareness of complex social issues. (Image credit: OceanOutdoor.com.)

If advancements in individualized, location-based advertising  makes you feel a little uneasy, like the machine is getting to know you a little too well, you might be interested to know that a recent Edelman survey reported 53 percent of people believe that “brands can do more to solve social ills than government". As little as that says about our legislation, it says a lot for businesses.

We look to advertising to (literally) show us a concept of progress. Companies looking to compete will recognize this as a multi-faceted opportunity; interactive ads allow brands to tell stories and get personal in real-time, increasing the relevancy of their product. But they can also gain leverage by using technology to advertise with social consciousness, to rail against the insatiable desire for immediate gratification, sense of inadequacy and pursuit of unattainable goals.

What else could be more timely, and noticeable?

Find out how HERE location services can help your company tailor ads for relevancy and audience.