This was originally published as a LinkedIn article.

Over the past few years, there has been a sea change for OEMs and in-vehicle connected services. As increasingly advanced mobile devices reached ubiquity among consumers, the use of smartphone apps as a connected tool for navigation and traffic updates has increased as they have surpassed most in-dash connected services both in usage and sophistication. Now, however, the tide is set to turn once again.

Last year we announced an array of new services from HERE Technologies which, for the first time, were powered by aggregating vehicle sensor data from multiple car makers. Now, we are excited to announce the launch of the enhanced HERE Real-Time Traffic -- the first of these next-generation services.

So, what does enhanced Real-Time Traffic offer? It's all about improving the accuracy of traffic information by tapping into the latest data being collected and shared by connected cars.

Our traffic information will be more accurate on all sorts of roadways, especially on arterial roads, while there are also enhancements such as more accurate lane-level traffic reporting and improved traffic safety warnings. We're also using hard-braking sensors to improve the detection of when and where such events occur.

Essentially, we're able to detect events faster, more frequently and with greater accuracy. For the people who use our products, this level of accuracy can offer a safer, more efficient driving experience.

The service's improvements, however, are only a small fragment of a bigger picture: one that hints at an entirely new playing field for OEMs and connected services.

For OEMs, the connected service playing field hasn't been even for some time. Over the past couple of years, smartphone applications have overtaken in-dash connected services, delivering innovative traffic and navigation features with a frankly unmatched user experience.

As a result, the market has until now almost been split into two tiers: OEM connected services, and smartphone applications, which have been seen as a tier above in terms of capability and user experience. Recently, this has meant that we've been helping OEMs deliver the top traffic services within their tier.

For HERE this was never enough, and the new services, starting with Real-Time Traffic, can break the mold and help OEMs deliver the best-connected services of both tiers, and set the standard for in-vehicle connected services.

We can do this by delivering the highest quality data of all traditional vendors, for regions all around the world. As OEMs look to make their traffic offerings globally available, the ability to offer accurate information on traffic flow, speed, congestion and incidents all around the world is invaluable. 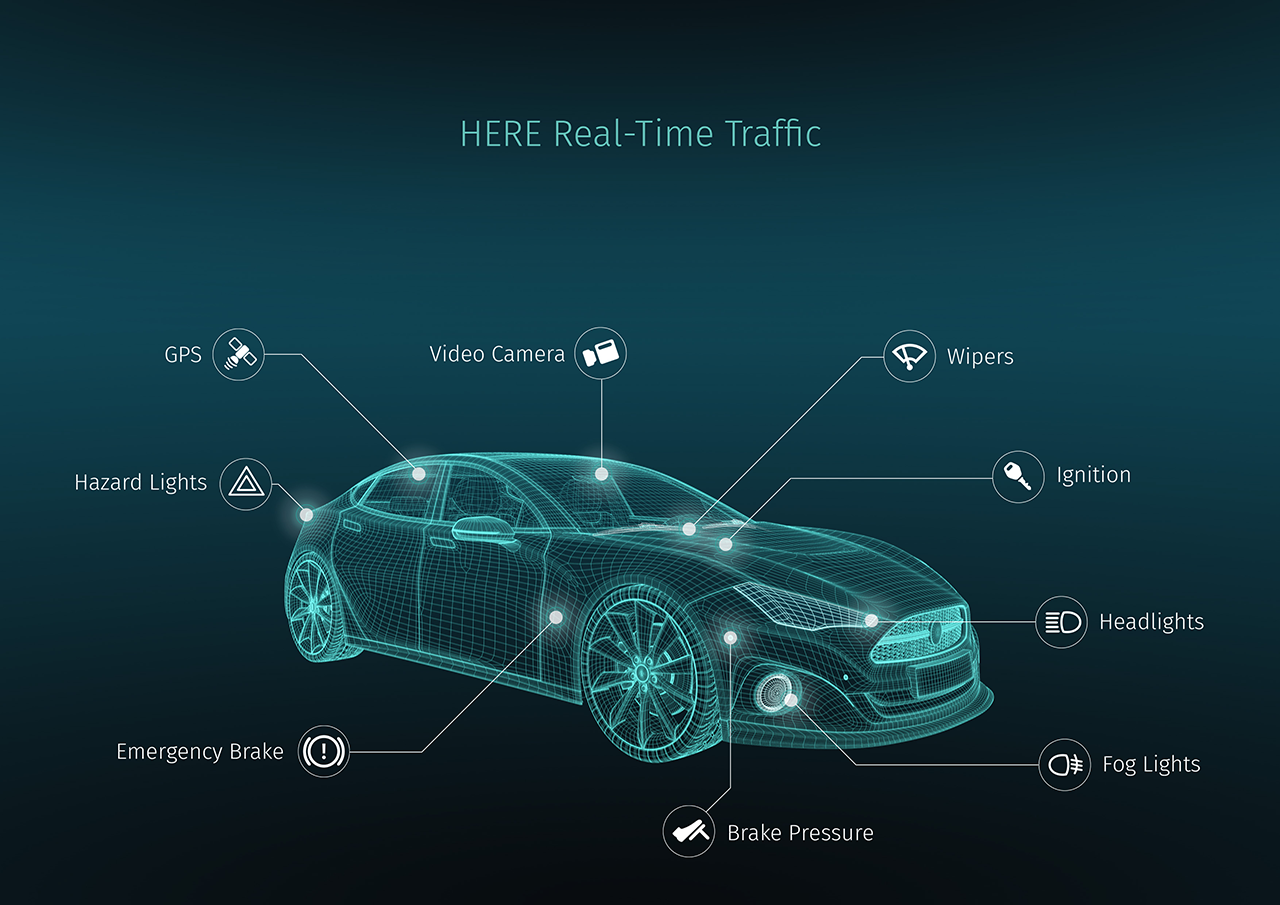 Not only this, but the functionality of this new generation of services can empower OEMs to deliver the user experience to match and even leap ahead of smartphone applications, all while offering a greater depth of data, and a seamless implementation process.

The key ingredients for this is data, and a collaborative model that should prove to be the automotive industry's standard as the autonomous vehicle looms over the horizon.

The ability to use rich sensor data, for the first time, from multiple carmakers has allowed us to make such substantial enhancements to our traffic products. This collaborative approach is where the future is headed, and thanks to our relationship with a number of competing car makers, all willing to share data, we are able to ride the crest of this wave.

We fully expect to see a growing number of automakers contributing their data in the future, as the rich benefits of this collaborative approach become apparent. We also expect to see more companies opt to mimic this approach, as more and more OEMs seek to gain practical, hands-on experience in how to monetise the vast amount of data that's being generated.

Thankfully, however, we are on the ground floor, and the data offered by these automakers -- probe data, in particular -- is making a huge difference. The sheer amount of probe data we now have available, offering more accurate location information on vehicles, is the real thrust of the improvements on offer in this release of Real-Time Traffic. 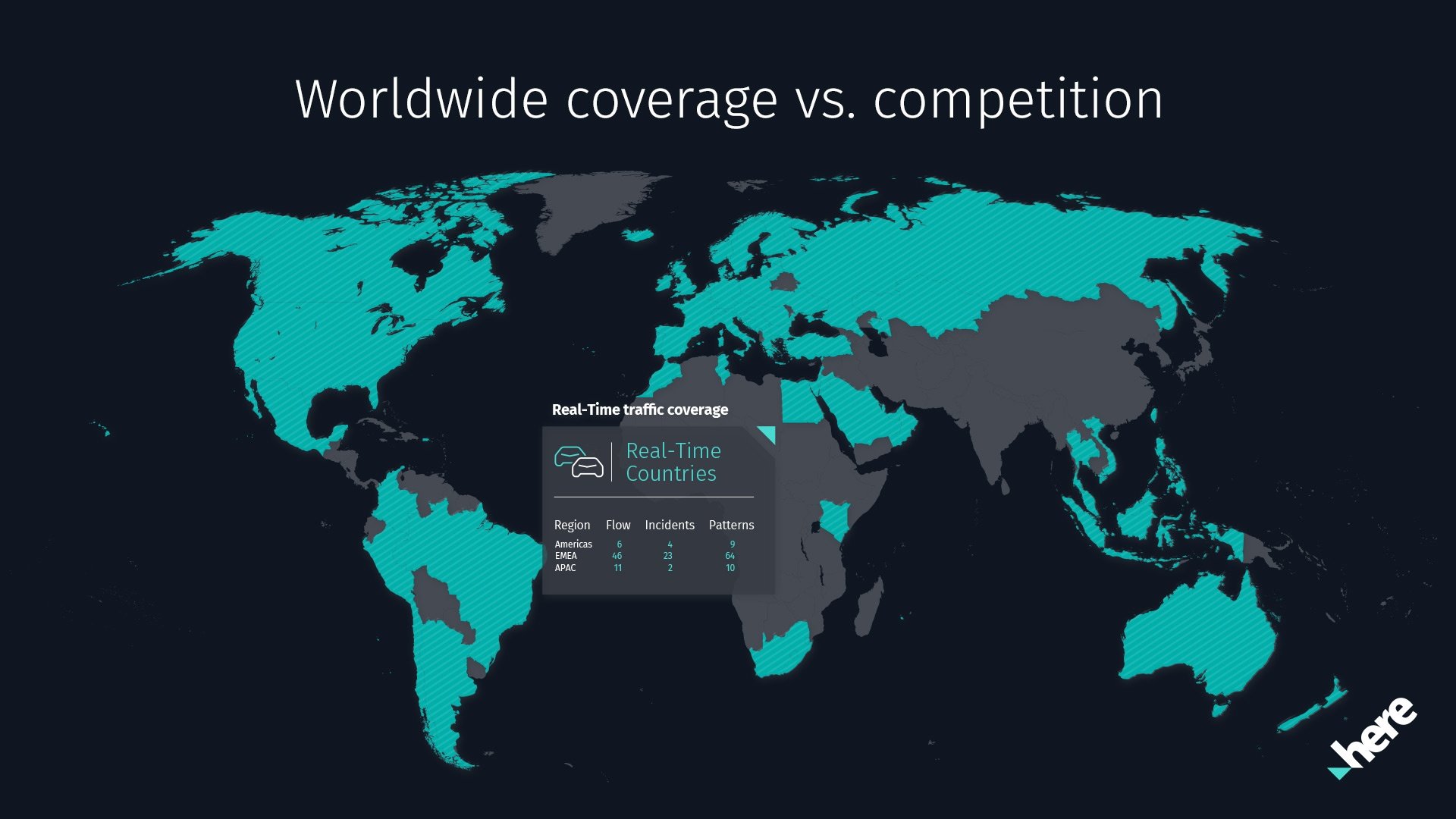 The impact is so profound, in-fact, that automakers have instantly become our most dominant providers of probe data in terms of both volume and quality, across key markets like the UK, Germany, France and Italy.

Fit for the future

The value of this collaborative approach is being felt now, and yet, in the future, we expect it to grow greater still. As we use increasingly accurate probes to power our services; the quality of our product will be so that it lends itself to semi-autonomous and eventually fully-autonomous driving.

For example, being able to detect road closures is absolutely critical for automated driving -- far more so than it is for human drivers. This probe data can help identify road closures faster and more accurately than ever before, and can help point our products towards supporting autonomous vehicles.

The next wave of development towards autonomous vehicles will see more cars get connected, and as they do, more sensors will be used, and more and better data will be available to enrich the capabilities of cars.

So, while our existing data and services are still not quite able to support autonomous vehicles, this release, and the release of the upcoming services, are a significant step towards the next wave of development and an autonomous future.

As HERE launches the first of its next generation services, powered by the rich vehicle sensor data from multiple car brands, OEMs can look to offer consumers the next great leap in connected services, and one that makes an autonomous future seem that much closer.