Finding yourself indoors – without the help of GPS 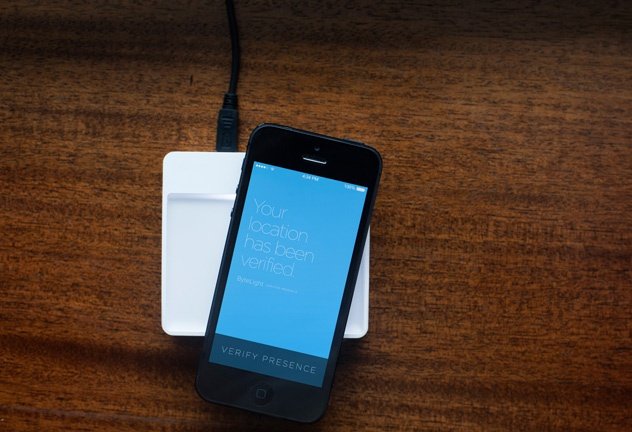 Imagine the benefits of knowing your precise location indoors. You could arrive at an airport and consult a smartphone app showing how to reach the departure gate, and how long it would take to get there. The app could even factor in the queues at security, because it knows how many people are waiting in line.

This is just one of many potential applications of indoor location technology, creating a market worth $10 billion to advertisers and marketers by 2018, accordingto Opus Research. But unlike outdoors, where your phone fixes your location from GPS satellites, inside, there’s no purpose-built solution. Systems capable of pinpointing your location to within a few centimetres are on the horizon, but for now location services require clever harnessing of existing technology.

One approach is to mimic the way GPS works by fixing your position relative to the Wi-Fi base stations found in airports, shopping malls and concert venues. If your phone can find three base stations, it’s possible to fix your position using the mathematical technique of trilateration by measuring the distance to each one. But Wi-Fi base stations weren’t built for the task, unlike GPS satellites which broadcast precise signals called timecodes. Instead, trilateration works out where you are from the strength of the Wi-Fi signal at your location. 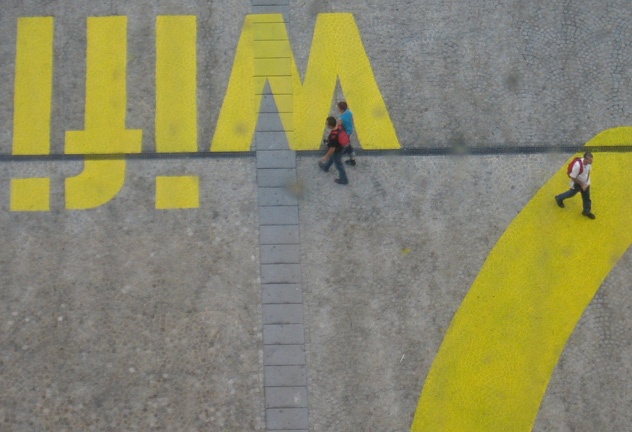 The drawback is that Wi-Fi uses radio waves. Indoors, radio is reflected by obstacles and refracted around corners. Wi-Fi signals even leak in from surrounding buildings and are affected by people. This means the signal strength changes constantly as doors open and close and people move around, and it’s why Wi-Fi on its own would only be capable of fixing your position to the nearest 10m.

The pursuit of precision

Better accuracy is critical to the most useful applications of indoor location technology. An airport app that knows you’re flying to London and that wet weather is forecast in the capital, could direct you to the precise part of a store selling umbrellas. Likewise, if a supermarket wants its app to display a voucher for 10 per-cent off organic muesli, it needs to know you’re in aisle 6 looking at breakfast cereal and not three aisles down with the pet food. 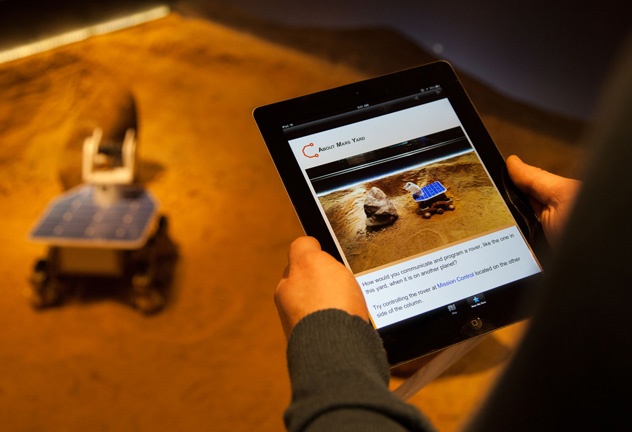 The accuracy of Wi-Fi fingerprints was improved still further by WiFiSLAM, a company acquired by Apple in 2013. It used mathematical techniques to calculate the probabilities that different Wi-Fi strengths would occur, dramatically reducing errors due to fluctuations in signal strength.

Another way of improving on Wi-Fi signals strengths is to harness some of the sensors built into many smartphones: accelerometers, gyroscopes (tilt sensors) and magnetometers (compasses). Your phone can detect when you’ve taken a step from the ‘bounce’ recorded by its accelerometer, when you’ve made a turn and the direction in which you’re walking. Amalgamating all this data, an approach known as ‘sensor fusion’, enables your position to be located. It’s even more useful when it’s mated with an accurate map, such as those being made of indoor locations around the world by HERE.

If you live in South Korea you’ll already be able to find your way around 21 large shopping malls, thanks to an app launched by LG for its G3 smartphone. The app exploits Qualcomm’s IZat sensor fusion technology, which is built into the G3’s Snapdragon processor. And since Qualcomm’s Snapdragon processors power many high-end Android and Windows Phone handsets, including Nokia Lumia and the Samsung Galaxy S5, you may be using it sooner than you think. The IZat technology is accurate to within 5m indoors. 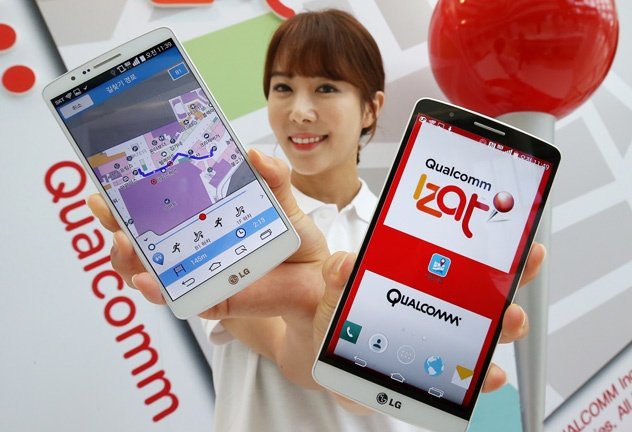 [We talked about the promise of iZAt technology for indoor mapping on HERE Three Sixty in 2013].

Not everyone believes Wi-Fi and sensor fusion are the promising technologies. In very crowded areas, such as busy shopping malls or stadiums, Wi-Fi signal strength would be affected by people moving around. That’s why IndoorAtlas is using just one smartphone sensor in its location technology: the magnetometer. Outdoors, the strength of the magnetic field measured by a magnetometer is strong in a north-south direction - ideal for a compass. Indoors, the Earth’s magnetic field is weaker and other sources, such as electric cables, help to generate a unique magnetic fingerprint for each building. By mapping the magnetic field, IndoorAtlas claims it can obtain a positional accuracy of less than 3m. Magnetic fields, as well as other signals, are also harnessed by its rival, indoo.rs.

I can see the light

Despite the promise of these technologies, others could yet find favour. For example, ceiling-mounted LED lights could be programmed to flash thousands of times per second. That’s too fast for the human eye to detect but easily possible for the camera in your smartphone. If lights in a hotel, conference hall or museum were all programmed to flash at slightly different speeds, software on your phone would know where you were standing from the frequency of the flashing. The more lights, the more precise it gets – a typical accuracy of 1m or less, obtained by your phone in under a second.

This VLC (Visible Light Communication) system is being developed by ByteLight in partnership with GE. One drawback for venues is that they’d need to install the ByteLight-equipped GE lightbulbs for the system to work. One benefit is that the bulbs incorporate a Bluetooth Low Energy (also called Bluetooth Smart) transmitter, with which stores could alert you to special offers - even if your phone was in your pocket. Take it out, and a location fix provided by VLC would direct you to the discounted products. 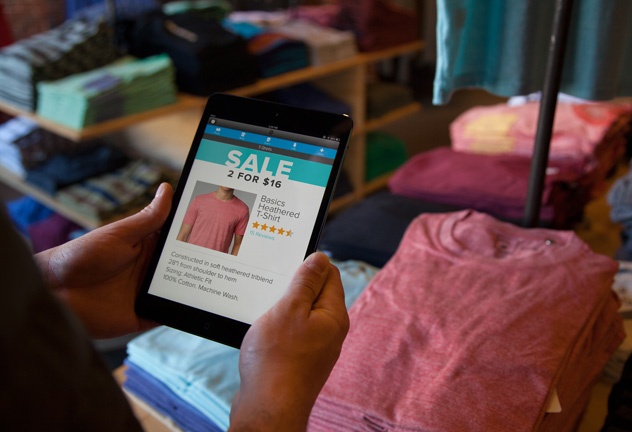 ByteLight is far from the only company bringing Bluetooth Low Energy transmitters to indoor positioning. Apple has kitted out all its US retail stores with its own technology, called iBeacons, and incorporated iBeacon software in iOS 7. Retailers can use it to send news, product information or coupons to customers who opt in. Major League Baseball stadiums have also installed Bluetooth Low Energy transmitters, enabling fans to ‘check in’ when they arrive at a game to receive maps, video and seat upgrade offers.

Bluetooth Low Energy beacons operate over a range of 50-70m. Assuming three beacons are within range, trilateration can again be used to fix your location. But like wi-fi, Bluetooth is a radio technology. Trilateration again relies on the measuring the strength of the radio signal, which is just as variable as wi-fi.

For indoor location to really fulfil its potential, accuracy needs to improve to the point where your phone knows where you are to within a few centimetres. In the long run, that could mean entirely new hardware and infrastructure based on a completely different technology: IR-UWB (Impulse Radio Ultra Wideband). IR-UWB transmits very short pulses, over a much wider range of frequencies than Wi-Fi, and these act as a precise time signal. Just like GPS, it’s precision time-keeping that’s the key to an accurate location fix.

One of the leaders in UWB technology, DecaWave, claims its system is accurate to within 10cm. For now it’s concentrating on electronic tags, which would be handy for locating lost car keys and other valuables. If its DW1000 chip ever finds its way into smartphones, it could usher in a whole new era for indoor location tracking.

There are a lot of competing technologies in the space. One thing that makes this area so interesting is that there won’t be just one winner, by the looks of things, and the ones that come to dominate are still anyone’s guess. How do you think indoor location will be solved?