Looking ahead at the Internet of infinite things

Is the Internet of Things (IoT) really countable? Besides the growing number of objects and potential market size, what other trends can we expect to see in the connected world in 2017 and beyond? For answers, we’ve rounded up industry analyst predictions.

Just when you thought every thing was already connected, new products at CES 2017 include a smart hair brush, smart tea cube and vibrating smart pants, to name a few. There’s no official count of newly launched connected products from the show yet, but plenty of analyst firms have estimates and outlooks for the IoT.

Of course, the IoT is made up of more than home appliances, personal gadgets and consumer computing devices; think sensors and actuators, machines and applications, vehicles, robotics, drones and so on and so on.

To infinity and beyond

Gartner had predicted a 30 percent growth of connected things in 2016 to 6.4 billion. IDC had calculated that 13 billion things were already connected by 2015, and now predicts, that by 2018, the number of IoT devices will be 22 billion. Juniper Research’s latest estimates forecasts 46 billion units by 2021.

Figures for market size vary as well. According to McKinsey & Company, the IoT could have a total potential economic impact between $3.9 trillion to $11.1 trillion a year by 2025. IDC forecasts a $1.7 billion revenue opportunity for the ecosystem by 2020 and issued a 2016 year-end worldwide look back on IoT spending of $737 million.

In addition, IDC expects global IoT spending  to see a compound annual growth rate (CAGR) of 15.6% by 2020, reaching $1.29 trillion. Investments will include hardware, software, services and networks. The manufacturing industry will lead the way, spending an estimated $178 billion, and transportation is next at $78 billion. 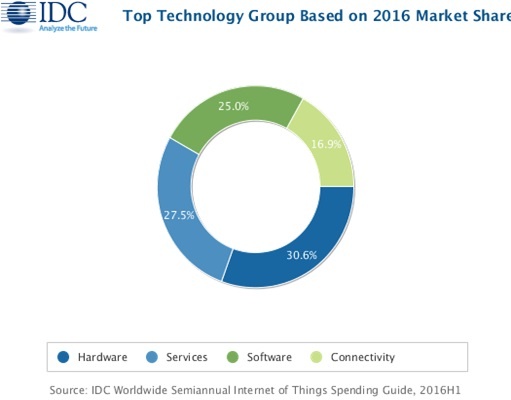 Utilities and consumer IoT purchases, ranked third and fourth, though the consumer sector is set to surpass utilities by 2020. As more things become connected, cross-Industry IoT investments — use cases common to all industries, such as connected vehicles and smart buildings — will be the largest over the next five years.

451 Research’s Voice of the Enterprise: Internet of Things (IoT) survey states that 90 percent of enterprises will increase IoT spending over the next 12 months, and 40 percent of respondents will raise IoT-related investments by 25 percent in 2017. 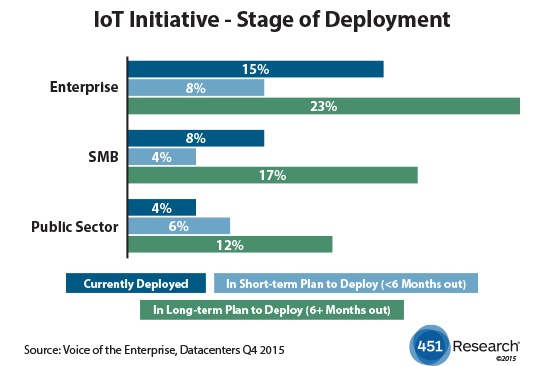 Seventy-one percent of enterprises are gathering data for IoT initiatives today, according to 451 Research’s report. Within that group, 68 percent are leveraging data to optimize operations, and 42 percent use IoT data to develop new products or enhance existing products and services.

According to Forrester, IoT software and solutions will be driving new levels of customer insight and engagement by 2021, but technology diversity and the need for organizational changes will stall many firms.

451 Research identified skills shortage as one obstacle, with 46 percent of enterprises saying they are having difficulty filling IoT-related positions, particularly in the areas of security and data analytics.

Still, IDC reports a cultural shift toward data-driven decisions, which is driving demand for big data and analytics technology and services, and estimates market growth in this area to be nearly 12 percent though 2020.

The firm sees the next wave of its previously named “3rd Platform” (built on the technology pillars of mobile computing, cloud services, big data and analytics and social networking) as leading to the “digital transformation (DX) economy,” in which DX will be at the center of growth and profitability strategies in the world’s largest companies.

Driven by code and fueled by big data, IDC predicts that by 2018, enterprises pursuing DX initiatives will more than double the size of their developer resources, resulting in the creation of 200,000 new applications and solutions to help leverage the IoT.

What IoT initiatives are your top priority in 2017 and beyond? Let us know in the comments below.