Over the past weeks, we've reported on the findings of an extensive research project conducted by HERE with 2000 people in the US and Germany.

We sought to understand who was most and least attracted to the idea of purchasing or riding in an autonomous car, or making use of an autonomous car service. We also sought to understand the reasons for those reactions, and the factors that tip people further towards acceptance. And then we also gave thought to how our roads, and our mobility, are likely to change as a consequence.

We envisage that, ultimately, autonomous cars will continue to be offered as a product, analogous to the personal or work-owned cars of today. Meanwhile, a service model will see us temporarily riding in autonomous cars for particular trips. Both models appeal to people: they want both.

However, a large number of car users suffer from trust issues when it comes to autonomous cars. Half the respondents, 49 per cent of car users, agree that they'd like to use an autonomous car, whether they're available for ownership or as a service. And 19 percent expressed that view with certainty. Others were unsure or averse to the experience of using autonomous cars.

In part, that's a natural fear of an unknown quantity: fully autonomous vehicles are still being designed and tested. But more broadly, handing over the wheel is difficult for many drivers. The average driver considers themselves to be anything but average. Actually, 73 percent of drivers believe that they are better at driving than most others. Nearly half (48 percent) don't trust other people to drive them safely. This degree of self-trust may be delusional. Nonetheless, autonomous cars have some high emotional hurdles to cross.

A second strand to this mistrust stems from how we've been conditioned by consumer technology over recent decades. A significant number of respondents said they're planning to wait until Version 2.0 of the autonomous car is in production, when the bugs they anticipate being present in the first such vehicles have been ironed-out.

When it comes to bridging this trust gap, our research found that car users who had experienced ADAS features in existing cars - like lane-departure warnings or self-parking capabilities - were far more likely to have positive attitudes towards autonomous cars. Having experienced some level of automation, it seems, leaves car users hungry for more. There's also a role for education by the car industry to allay people's fears and illustrate the benefits.

The mobility mix today is complex, for many people. More than half of us (53 percent) use more than three modes of transport during the course of a typical week. And it's not just people who are dependent on public transit. In fact, 83 percent of these 'multi-modal' travellers own a private vehicle.

Our respondents think that autonomous car alternatives have the potential to take the place of existing vehicles. A majority (58 percent) think that owned, private cars will ultimately be replaced by autonomous cars. Interestingly, 47 percent also said they thought that autonomous 'Car-as-a-Service' offerings would eventually be compelling enough to replace the privately owned car.

But the impact is set to be even wider. People could also see that taxi and ride-sharing services would be impacted. Public transit might fall in demand if the automated alternatives are both economical and convenient. People envisaged using autonomous cars for all kinds of journeys - the daily commute and school run, but also in cases where they might currently be more inclined to use a taxi or ride-sharing service, such as nights out or airport trips. Some people thought they might walk or cycle less if an autonomous car was on hand.

We also discovered that autonomous cars, at present, are judged as belonging to the 'gadgets' category of possessions, rather than the automotive sector. In fact, the number of gadgets owned by a person is likely to be proportional to their positivity about autonomous vehicles. 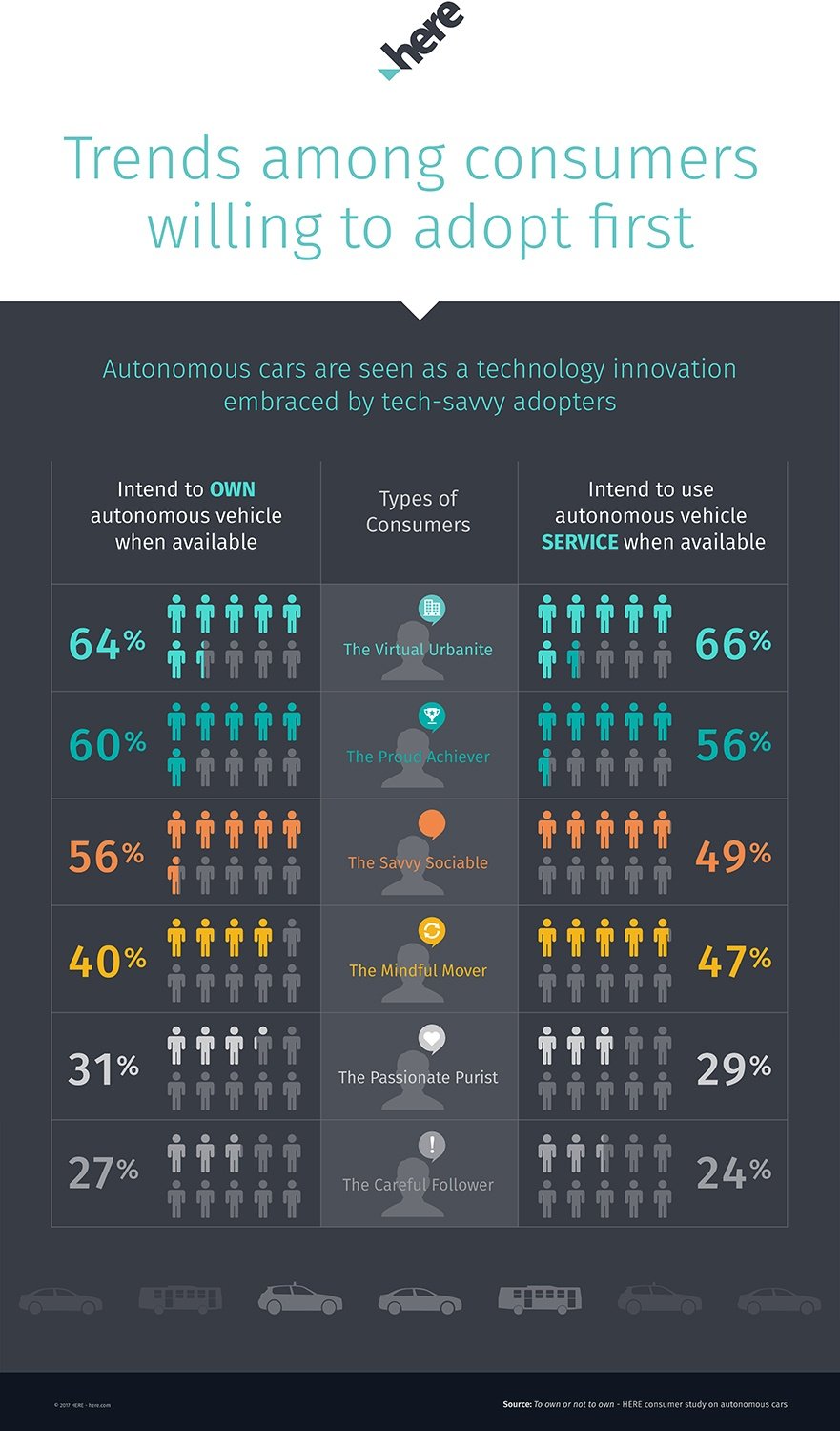 Attitudes to cars and motoring does not have any particular correlation with the extent to which people are looking forward towards autonomous options. In terms of consumer segments, the most likely types of people to warm towards autonomous cars are the 'virtual urbanites', the most eager early-adopters of new technology. This group is closely followed by 'proud achievers' who want their car and tech to express their personality and how far they’ve come. The third most eager group are'savvy sociables': those who are prepared to try any new technology that helps them remove friction from achieving their social goals.

If you missed out on any of these articles, here's a quick checklist so you can get the full picture:

Who will be the first to switch to autonomous cars?