Our transportation landscape is more varied than many people realise. With the advent of autonomous cars, either as personal possessions or in the form of third-party services, the level of fragmentation is only set to grow.

This is the fourth post based on research conducted by HERE with 2000 car users in the U.S. and Germany. In the first post, we described the way in which autonomous cars will arrive, not just as a product to own, but also in the form of services to use. The second post described the trust gap that will need to be bridged before people will trust autonomous cars. In the third post, we looked at how car users imagine they'll use autonomous private vehicles and services in the future. 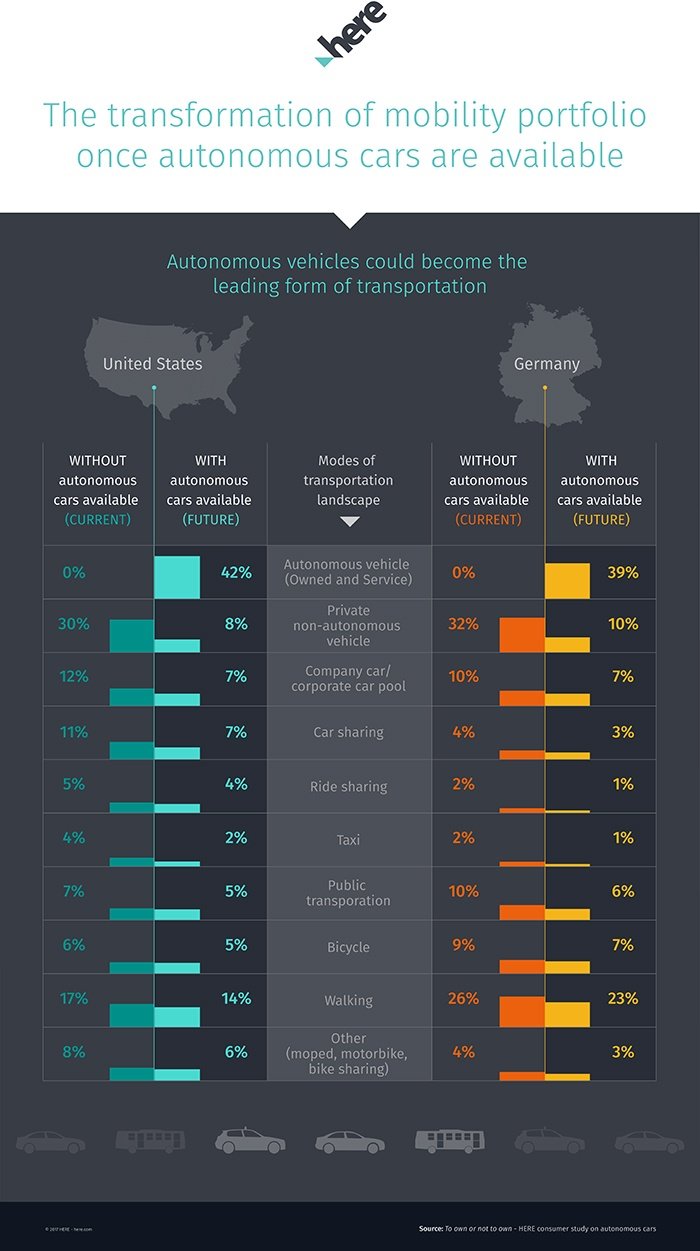 Transportation is changing, but people are already used to a multi-modal transport mix, our study found. A substantial portion of our sample – 40 percent – use four different kinds of transportation in one week. You might imagine that these people are those who rely on public transit to get around, but not so. Actually, 83 percent of these 'multi-modal' travellers also own a car.

Once autonomous options become available – as a product and as services – the landscape is set to change even further, our car users believe. Private ownership of 'manual' vehicles will rapidly decline – by over 70 percent, they believe, once other autonomous vehicles are available. The use of existing public transit is also set to drop – by up to 40 percent. Altogether, our car users believed that autonomous vehicle rides could represent 42 percent of all U.S. travel time and 39 percent of all German travel time – becoming the most dominant method of transport.

The advent of autonomous cars may also impact on non-motorised forms of transport. Walking and cycling might also be reduced if autonomous options become convenient and inexpensive enough to form a compelling alternative.

The big question is, of course, when this will happen? Some options are set to arrive very quickly. We've recently discussed the six levels of autonomous driving. Owned autonomous cars – at level three where many driving operations happen hands-off, but a driver is still required at some points – seem likely to become available as soon as 2020. However, autonomous cars as a service – self-driving taxis, for example – will require the evolution of the technology to full level five, driverless capability. Predictions vary considerably as to how long that is likely to take.