How Toyota, Volvo and others help you to avoid accidents

We've seen technology in cars come on in leaps and bounds over the past couple of decades - just check out headlights as an example - but nowhere is innovation more apparent than when it comes to safety.

It's now got to the point where manufacturers have gone beyond making their vehicles as tough as possible to keep you safe an accident, instead also designing cars to actively avoid accidents in the first place. We're not just seeing crash prevention technology appear on high-end cars either, but across the spectrum.

Swedish car maker Volvo was one of the first companies to introduce crash prevention technology, ten years ago in 2006.

Its City Safety technology is capable of braking automatically if the driver turns in front of an oncoming vehicle, potentially avoiding a head-on smash, and Volvo claims it's the first system to automatically brake at intersections. Volvo has also designed City Safety to work with cars and vehicles traveling in the same direction, with a camera and radar integrated into the top of the windscreen.

Not wanting to take control away from the driver, Volvo's system offers audible and haptic warnings, only activating auto braking when it has to, and then full braking power a second before impact. Even if that’s not quite enough to stop you from crashing altogether, it's likely to reduce your speed by a considerable amount, potentially proving the difference between a life-threatening crash and a much smaller collision.

Volvo isn't the only company working on collision avoidance tech, with Subaru implementing its EyeSight tech in its latest models. Just like City Safety, this involves cameras mounted to the top of the windscreen, with the tech capable of providing both audible and visible warnings. And if the driver doesn't respond, EyeSight is capable of braking the car for you.

EyeSight includes steering assistance, adaptive cruise control and the ability to recognise brake lights, slowing the car if necessary depending on surrounding vehicles, and it also includes more basic technology like lane departure warnings. With pre-collision braking and throttle management, Subaru is doing everything possible to ensure you never actually need to rely on more conventional safety features like airbags.

Mercedes-Benz has also joined in the action, introducing Collision Prevention Assist, which uses radar to continuously monitor the distance to the vehicle in front.

You’ll get several seconds to respond to a warning light in the instrument cluster if you get that little bit too close to the vehicle in front, with an intermittent tone sounding if the distance decreases quickly. If braking by the driver isn’t enough to slow the car sufficiently, Collision Prevention Assist will also apply the brakes. 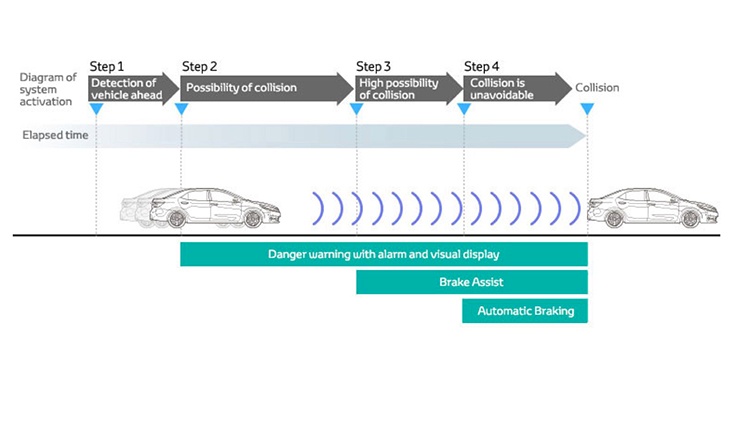 During these steps the car will offer an alarm and visual warning, followed by braking assistance and finally fully automatic braking. Toyota has also gone one step further when it comes to pedestrians, with a single-lens camera sensor and millimeter-wave radar designed to work together to recognise and avoid hitting pedestrians.

So what happens next? As one of the leading car companies when it comes to technology, it’s no surprise to see BMW has been working on its own collision-avoidance technology, in this case dubbed Active Assist, and future BMWs are set to be a whole lot smarter than the average car.

Active Assist uses a huge range of laser scanners, cameras and even a few ultrasound sensors that will make your journey safer by detecting obstacles and other vehicles in the immediate surroundings. Four laser scanners can measure precise distances to other objects, along with measuring speeds and surroundings, and BMW explains that the car can then form a picture of which areas are accessible and free from obstacles.

This is BMW’s next step towards fully autonomous vehicles, but if you can’t wait you can benefit from the company’s ConnectedDrive tech on current cars, with its Traffic Jam Assistant system providing adaptive cruise control that can actually stop your BMW if necessary. Better yet, if the car does sense an impending accident, BMW’s Active Protection system can tighten the seat belts, place your seats more upright, close the windows and make sure the car isn’t moving if you do actually have an accident.

It’s technology like this that marks a natural progression towards trusting cars to drive themselves; after all, if we trust our cars to help out and make all the difference when we need it most, why not hand over the wheel before the going gets tough…