Humans learned how to beam light from the front of a vehicle onto the surface of a road hundreds of years ago, so how much innovation is left in the humble car headlight? Allow us to illuminate you.

Headlight technology has evolved rapidly over the years. We've come a long way from old gas lamps that would potentially set an entire car alight during the 1800s, and the safer (yet often quite pointless) early electric lamps that burnt out before you reached the end of your journey.

Today, halogen bulbs are most commonly used. These bulbs, filled with halogen (iodine and bromine) gas, are cheap to produce, yet have numerous drawbacks, most notably the fact they are incredibly energy inefficient, sucking electricity from your car's battery and alternator, which are ultimately fed by the precious juice in your fuel tank.

Over the years, carmakers have been moving towards Xenon, or high-intensity discharge headlamps (HID) headlight technology. These work a little like a neon tube – with electrodes at each end of that tube passing a current through tungsten and other gases. The gases illuminate, generating light that is approximately twice the power of a halogen system for roughly the same energy requirement. But even this is old tech.

Carmakers in the modern era have begun embracing LED headlight technology – essentially a panel of dozens of light emitting diodes that, together, emit a very strong beam. LEDs have a noticeable efficiency advantage over other headlight types, requiring far less power from your car's battery to produce a light.

Crucially, LED lights can be controlled far more effectively than Xenon or halogen systems, meaning they can adapt to a range of driving situations. The LED units in Audi's Matrix LED headlights, for example, can be dimmed, brightened or switched off individually, to adjust the lighting pattern up to 100 times per second.

The advantage? It's able to direct light away from oncoming vehicles, minimising the likelihood of your lights blinding others as they approach, without having to reduce the overall brightness of the beam on the road ahead. Essentially, you can drive with full beams switched on every step of the way, and other road users will be none the wiser. Or blinder.

Mercedes is planning a multibeam system with 84 individual LEDs, with the possibility of expanding the technology to 1,024 LEDs in the not too distant future, giving us the prospect of brighter lights, even more control, and wider, smarter beam patterns that follow the road ahead more effectively.

BMW has dabbled in the world of LEDs, but is also focusing on new laser-based technology. Yes, the thought of cars charging down the highway with lightsabre-style beams hacking everything to pieces is just terrifying, but fret not – when you look at a laser headlight, you're not actually looking directly at a laser beam. 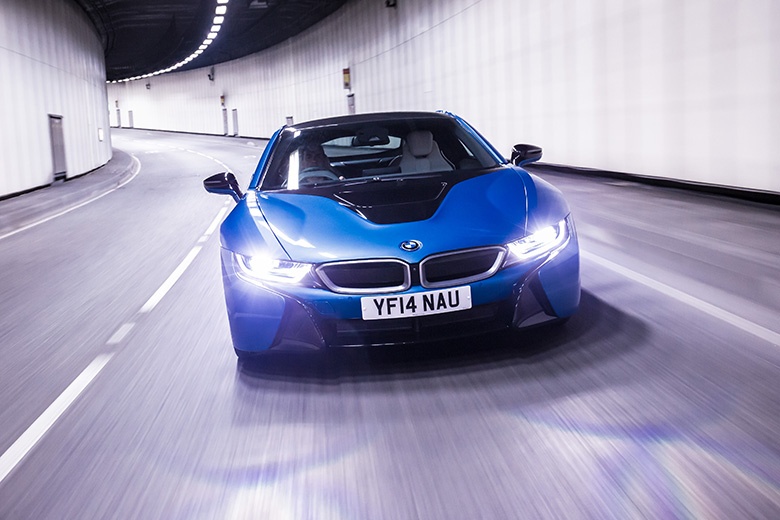 Three blue lasers at the back of the headlight assembly fire onto a set of mirrors near the front. These focus the light energy into a lens filled with yellow phosphorus, which in turn emits a bright white light. That light hits a reflector, which then bounces a perfectly safe, and very diffuse beam onto the path ahead.

BMW says laser lighting has an illuminating power 1,000 times more powerful than LEDs. They can also be smaller and lighter, meaning designers have a lot more flexibility with the size, shape and position of their headlight assemblies.

There is, of course, the possibility of a headlight assembly becoming damaged in an accident, freeing rampant laser beams to slice through everything in their path, but BMW assures us that the power to the beams is cut if the headlight housing is compromised in any way. Good to know.

Even more bonkers than lasers, is the prospect of controlling headlights with your own eyeballs. General Motors is working on a new version of its Adaptive Forward Lighting system, which attempts to aim a car's headlights where a driver is looking.

The system uses a camera pointed at a driver's face, monitoring prominent features such as the nose and eyes to help it figure out the direction in which you're looking. Meanwhile, infra-red sensors and central photo-diodes are used to scan the driver's eyes more than 50 times a second. At night, this will cause the headlights to illuminate parts of the road the driver happens to be looking at – be it around a bend, or at an object at the side of the road.

The eye-tracking headlight system is still a research project at present, but it shows some interesting possibilities and could make the driver feel even more connected to his or her vehicle.

Not at all bonkers and available right now, though, Adaptive Headlights use maps to control the direction of the beam. The map knows that a curve is ahead and can start to swivel the lamps laterally into the curve exactly when you need them to. BMW’s version of this technology also looks at vertical variations in the road, lowering the throw control as you drive over a knoll, and raising it when you are in a dip, ensuring visibility without dazzling oncoming drivers.

Ever wondered why driving at night in the rain is so difficult? Well it's partly because those pesky droplets reflect your headlight beams (and other peoples') all over the place, making it difficult to see anything other than shiny, reflective water in air.

New technology from Intel and Carnegie Mellon University may, one day, have this phenomenon licked. Instead of using a normal bulb, lasers or LEDs, their smart car headlights use a projection system that can effectively see through rain.

A video camera keeps a watchful eye on the drops of rain as they enter the headlights' beams. The picture is sent to a processing unit, which identifies individual raindrops and their projected path within a driver's field of view. Light rays from the headlight that would normally illuminate these droplets are switched off for a fraction of a second, leaving those with a clear path through the rain to illuminate the road ahead.