State-of-the-art location and navigation services such as those provided by HERE depend on radio devices, including GPS, beacons, and even Wi-Fi signals. But how will future rovers and astronauts navigate on other worlds in the absence of such devices?

How can lessons learned from development now in progress aid navigation in GPS-challenged locations here on Earth?

To find out, we spoke with John Thornton, the CEO of Astrobotic, a Pittsburgh, Pennsylvania company building robotic lunar landers and rovers. The company is on the move, having recently secured close to $100 million in funding from NASA, including $79.5 million to land more than a dozen scientific payloads on the moon. That's in addition to 14 other payloads for other companies and organizations already paying for rides to the moon.

“We've had our breakout year," Thornton says. The company staff more than tripled in 2019, according to Thornton. And he says the company is on track for a history-making commercial soft landing on the moon in the summer of 2021.

To make that milestone, however, the company's landers and rovers will have to navigate without the benefit of human intervention or GPS.

One giant leap for robotkind

The quarter-million-mile distance to the moon makes real-time, two-way communication for remote control impossible. And since the moon has no GPS satellites, Astrobotic's vehicles will have to get around without those too.

Instead, an Astrobotic lander will find its way to a pre-defined landing spot using onboard maps. On the way down, the lander will also have to identify, in real-time, obstacles that could jeopardize the mission. That feat was famously completed only in the nick of time as fuel ran low by Neil Armstrong during the first human lunar landing in 1969.

After touchdown, Astrobotic's lander will launch a rover, which also will have to find its way around without remote control from Earth or the benefit of GPS.

Astrobotic's solution for both landers and rovers: a self-contained form of navigation the company calls terrain-relative navigation.

Astrobotic's navigation system relies on maps made from images taken from lunar orbit by NASA's Lunar Reconnaissance Orbiter (launched in 2009 and still mapping the lunar surface). The maps will guide the lander to within 100 meters of the touchdown site, Thornton explains. From there, an onboard machine vision system will take over. “It's the same kind of cameras that you would use in a factory [robot] to identify parts and distances from things," Thornton says.

The rover will also sense wheel turns the way terrestrial cars track mileage. It will also carry a laser range finder, or LIDAR, and an inertial navigation unit that can calculate movement from small accelerations.

Despite the extra gear, navigation on the lunar surface comes with its own set of dangers. “Shadows, of course, can kill your rover because it's a solar-powered rover, and shadows are super cold," Thornton explains. “It is really, really important to navigate precisely so that you can avoid the shadows and get to the right location at the right time, such that you stay in light throughout."

While the first generation of Astrobotic vehicles will depend on maps, the next generation will get around without even that extra bit of help. “Let's say you approach an asteroid that you haven't mapped," Thornton says. “Can you map it in real-time and navigate it in real-time? That's the next level."

Astrobotic's terrain-relative navigation system will not only help future space exploration but could also advance location services in GPS-denied environments closer to home.

In Iceland in the summer of 2018, a drone with Astrobotic's visual navigation system onboard successfully navigated the inside of a lava tube—a cave created by lava flow—similar to those on the moon. 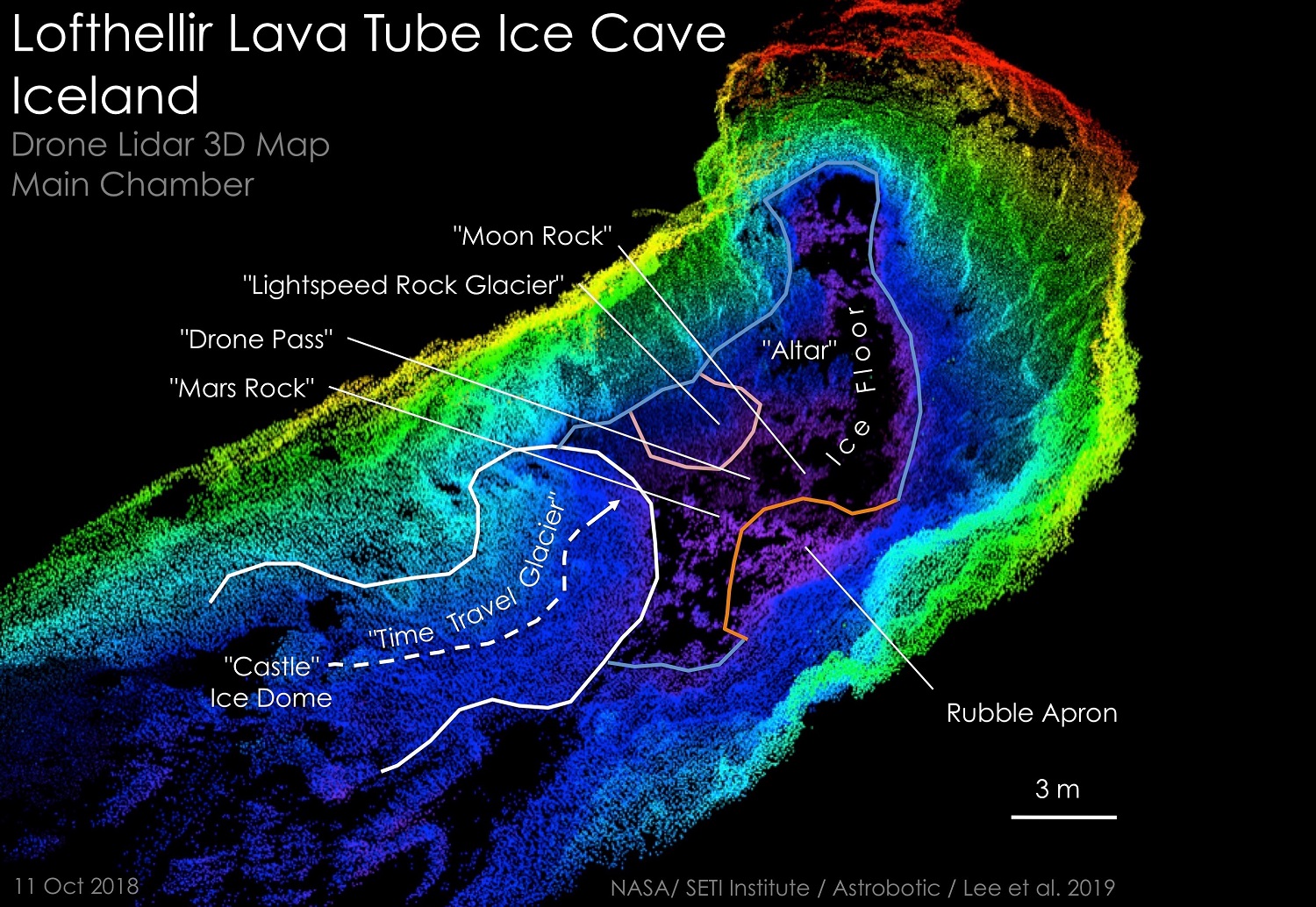 While helping to prove the technology that will soon fly on the moon, the test also pointed the way to future Earthy applications.

War zones with ever-shifting terrain and cities whose tall buildings block and scatter GPS signals are two areas Thornton imagines benefiting from alternatives to GPS. “Anywhere the GPS signal might be degraded, you want a backup for it."

Blazing a trail for the future

After launching its first mission, Astrobotic plans to carry scientific and commercial payloads to the lunar surface annually. “The exciting thing is that NASA wants to do that too," Thornton says. “So that means that we have at least one customer that wants to run at that cadence. And we'll be able to combine that with demand from the rest of the world."

Along the way, terrain-relative navigation might just find its way back to Earth's GPS-challenged environments—perhaps through research partnerships like our recently announced team-up with the Symbiosis Institute of Geoinformatics in India.