The evolution of cruise control

Amongst the sea of automated functions appearing in modern cars, from remote control parking to evasive steering assist, cruise control might not sound like the most exciting, newfangled feature – but its invention was just the start for automation.

Jump back half a century, and the introduction of an automated mechanism for speed control was having a momentous impact on the automotive world. And while cruise control has been maintaining speeds in vehicles for decades, the technology hasn’t remained stagnant it’s been changing and improving immensely to this day.

Inspiration strikes in a strange place

While riding as a passenger in his lawyer’s car in the 1940s, American engineer Ralph Teetor was irritated by the constant jerking along the journey. The cause? His lawyer had a tendency slow down when talking and speed up when listening.

Already experienced with vehicle mechanisms, having been a pioneer of automatic transmission, Teetor set about designing a solution to his lawyer’s pesky driving habits. His solution would count the rotations of the vehicle’s drive shaft to calculate its speed, then use a bi-directional screw-drive electric motor to adjust the throttle and maintain an even pace.

After several years of work, not to mention a procession of names for his invention (the ‘Controlmatic’ and ‘Speedostat,’ to name a few), Teetor was able to secure a patent for a “Speed control device for resisting operation of the accelerator” in 1950. 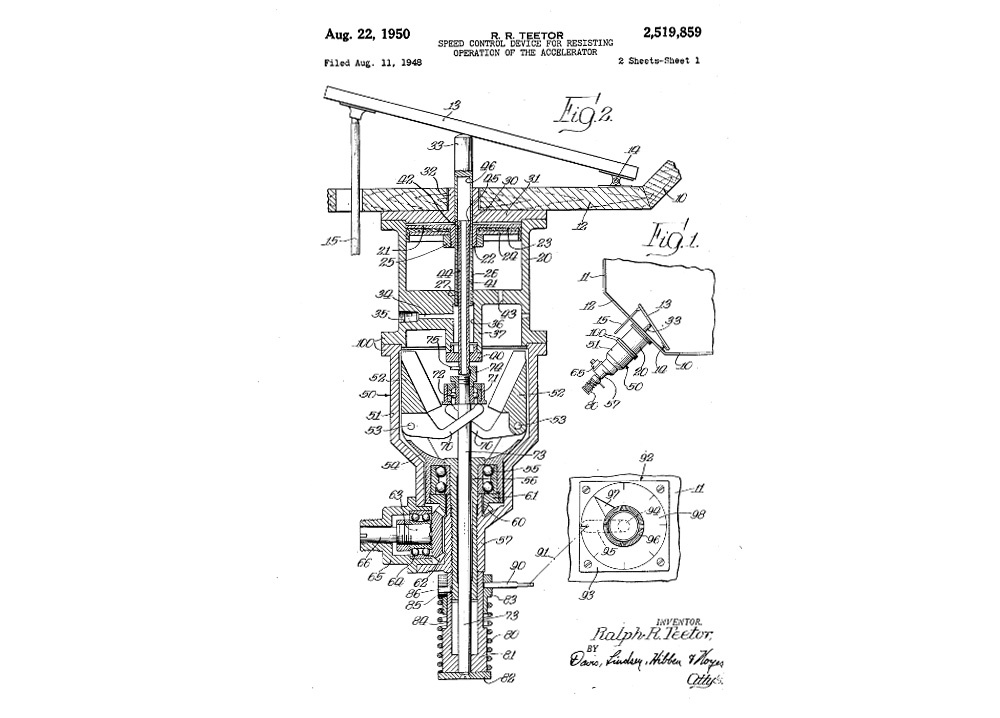 In 1958, Chrysler’s Imperial became the first car to implement Teetor’s invention, initially under the name “Auto-pilot,” although the company would eventually use the moniker we know today. “Cruise control” quickly became a popular feature across the industry, and in the 1960s, it could be found in cars from every major manufacturer.

Beyond the obvious benefit of giving the driver’s feet some respite on a long trip, cruise control was also promoted as a blessing for consumers during the 1973 oil crisis, which saw fuel prices skyrocket. By keeping speeds stable, cruise control could save consumers money by avoiding the fuel surges associated with an unsteady foot on the pedals.

Cruising into the 21st century

By the early 1990s, car manufacturers had begun building upon cruise control with new technologies, and the following decades have seen Teetor’s analog method of speed management traded with a digital approach.

LiDAR-, radar-, sonar- and camera-based solutions (often working concurrently) arrived in our cars, allowing them to sense other vehicles in order to determine speed, detect & avoid collisions, maintain lanes, and predict the behaviour of other vehicles among other capabilities. Though these systems have been marketed with different names over the years, they’re best known as ‘adaptive cruise control’ and ‘predictive cruise control.’

Teetor’s invention undoubtedly left its mark. According to a survey by the American Automobile Association, adaptive cruise control is the second most popular automated function among drivers (behind lane departure warnings), and an essential feature for millennial buyers.

But the real impact of cruise control might be that it surfaced the tip of the iceberg for Advanced Driver Assistance Systems and, eventually, autonomous driving. Teetor managed to give the automotive world a taste of how automated systems can fit into the future of driving, and car manufacturers have continued to find ways to expand on the idea, from parking assistance and sign detection to completely driverless travel.