Mapping the sea: Let's take a look at Portolan Charts

Back in the days before printed maps – let alone radio navigation or GPS – how did sailors reach their destinations without falling foul of reefs, sandbars and other marine hazards? For much of the Middle Ages, they used portolans. 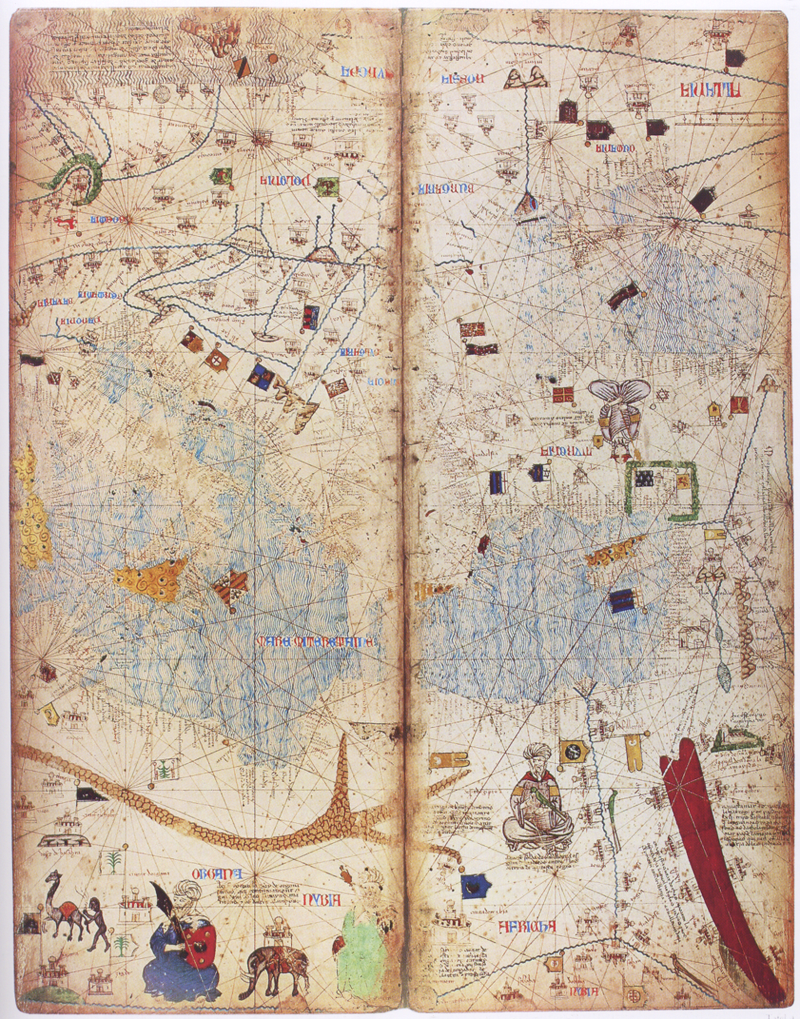 The Catalan Atlas of 1375, attributed to Abraham Cresques and his son Jehuda. Inland features are shown, with Christian cities marked by a cross and others by a dome. Public Domain

The word is derived from the Italian adjective portolani, meaning “to do with to ports”. These marine charts were usually drawn on to a whole sheet of sheepskin vellum with the skin of the neck still attached. Created with the aid of a magnetic compass, and intended for use with one, they thus appeared after that invention reached Europe from China via the Islamic world.

Alfonso the Wise of Castile (reigned 1252–84) ordered charts and compasses for the use of his shipmasters, and soon afterwards, portolan charts began to be made in the Balearic Islands by Jewish cartographers such as Abraham Cresques on Majorca, and in Italian cities such as Genoa and Venice. The Catalan charts often showed some inland features such as mountain ranges and major cities; the Italian ones typically left the interiors blank, while the coasts were crowded with detail, naming every port, fishing village, headland, bay and estuary.

Portolans do not show lines of latitude or longitude, but are criss-crossed with rhumbs – diagonal lines emanating from the 32 points of compass roses arranged throughout the map to enable pilots to chart a course to their destination. They appear to have been drawn using a combination of compass bearings and observation; cartometric investigation has revealed that no fixed projection was used, and that a number of errors can be explained by false compass readings due to variations in the earth’s magnetic field. A scale of distance was also included. 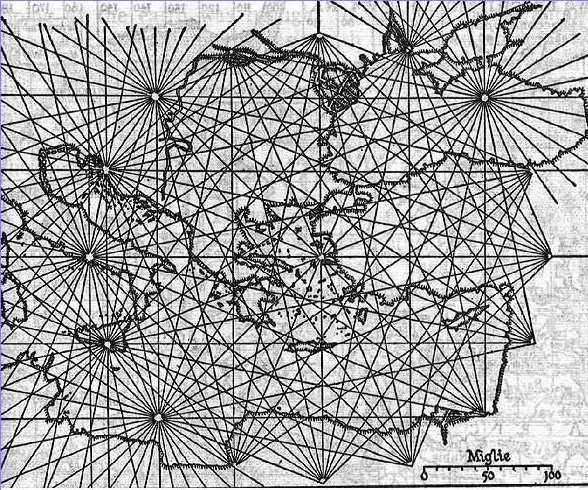 The earliest surviving signed and dated navigational chart, was produced at Venice by Pietro Vesconte in 1311, and shows the Eastern Mediterranean and the Black Sea. Public Domain

A 1367 portolan by the Venetian brothers Domenico and Francesco Pizzigano draws on the voyages of Genoese navigators. Extending further into the Atlantic than any previous map to include Madeira and the Canary Islands, it also shows several mythical islands, including the “Fortunate Isles” said to have been discovered in the 6th century by the Irish abbot St Brendan, who is pictured on the map. 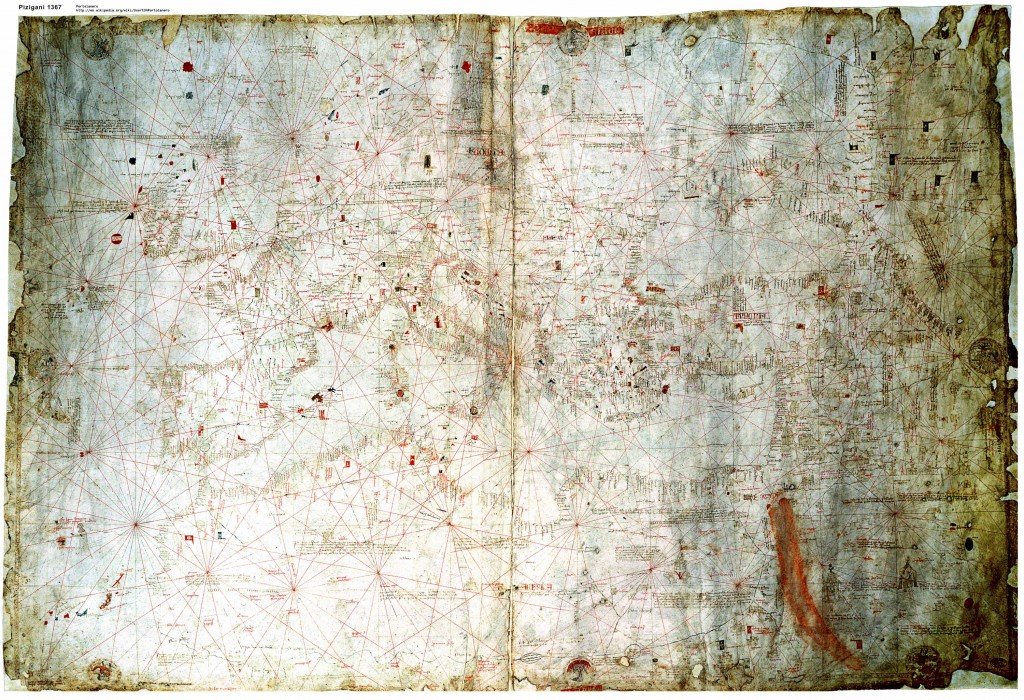 The Pizzigani brothers’ chart of the Atlantic (Venice, 1367) Public Domain

In 1513, the celebrated Ottoman admiral Piri Reis compiled a world portolan showing the newly discovered Americas. The surviving half of the map, now in the Topkapi Palace Museum in Istanbul, shows the western coasts of Europe and North Africa and the coast of Central and South America. He drew on Arabic, Indian and European sources, including “the map of the western lands drawn by Columbus”. 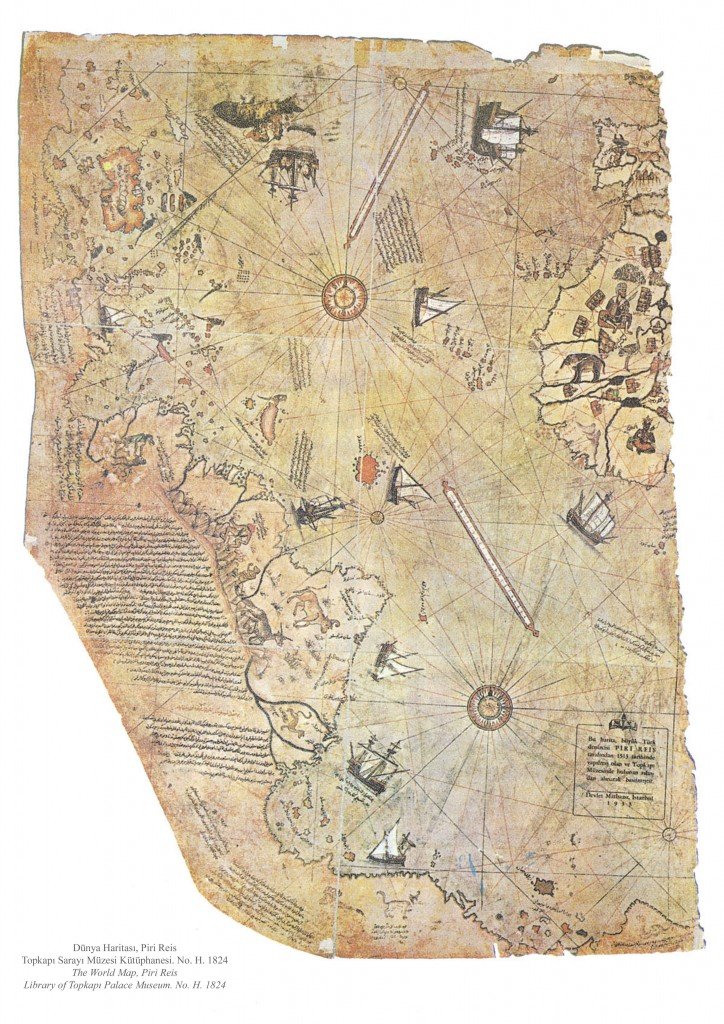 By this time, better navigational instruments – such as the quadrant or cross-staff to determine latitude by the altitude of the Sun or Pole Star – were increasing the accuracy sea charts. Seaman’s manuals such as those produced in England by Jean Rotz and Battista Testarossa had developed into sophisticated instruction books covering every aspect of marine navigation. They would typically contain a preface dealing with the earth’s place amid the heavenly bodies; a “rutter’ or routier listing the landmarks, anchorages, shoals and watering-places on a given route; a calendar and a set of tables to determine latitude by the noon-tide altitude of the sun; and a set of portolan charts. 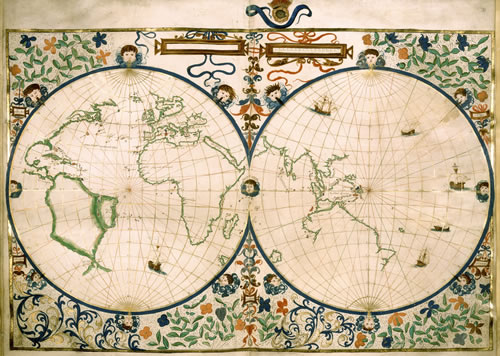 The coming of print

Marine atlases began to be printed; in addition to charts, they contained practical advice on celestial navigation following the format of the old manuscript manuals, complete with astronomical tables and descriptions of the instruments. The first and most successful was the Spieghel der Zeevaerdt (1584) by Lucas Wagenhaer, a Dutch pilot based at Enkhuizen. Wagenhaer’s manual became so popular that English sailors referred to any sea chart as a ‘Waggoner’.

In 1569, Gerard Mercator devised the cylindrical projection that bears his name and would hold sway for centuries. The full title of the map on which it first appeared, Nova et Aucta Orbis Terrae Descriptio ad Usum Navigantium Emendata, spells out its practical application: “A new and augmented description of Earth corrected for the use of sailors”, and he drew on many portolans in its preparation. 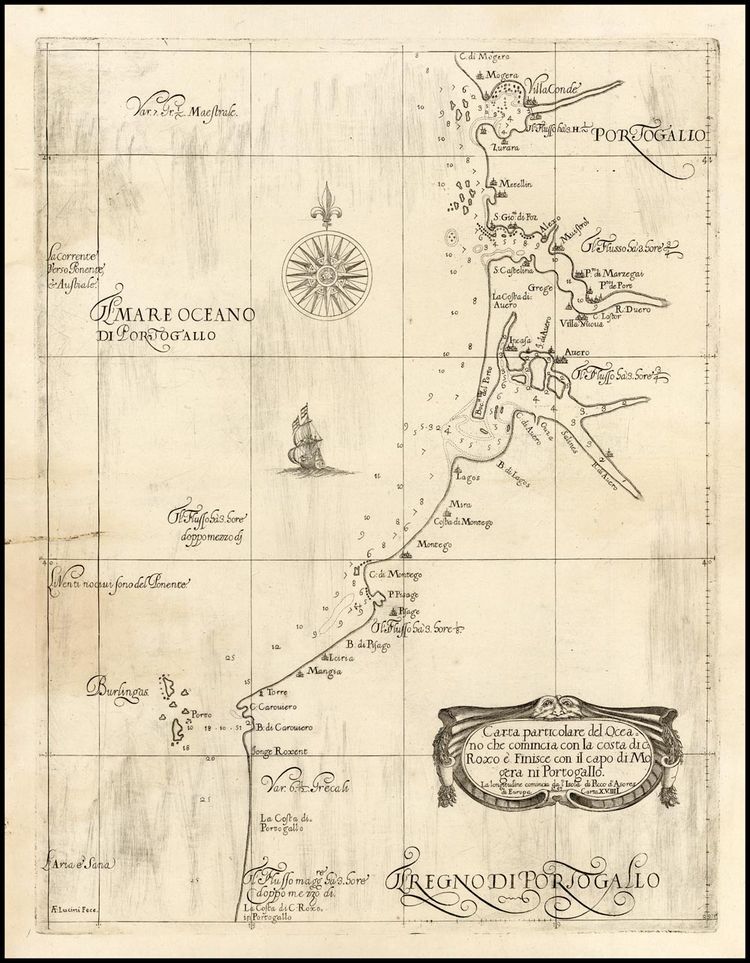 The first marine atlas of the whole world, and the first to use Mercator’s projection, was produced in Italy by an exiled English nobleman, Robert Dudley. The son of Elizabeth I’s favourite the Earl of Leicester, and a friend of Francis Drake, he fell out of favour with James I and became naval advisor to the Grand Duke of Tuscany in Florence. The 130 charts in his Dell’Arcano del Mare  (1646–7) were all based on original surveys rather than copied from existing maps.  They dispensed with rhumb lines in favour of latitude and longitude – but like the portolans that preceded them, showed little or no inland detail.

Secrets of the sea

Yet despite the development of printing, portolans remained popular with sailors well into the 17th century. The vellum was more hardwearing and water resistant than paper and, because each hand-drawn map was unique, it could contain geographical information that the owners wanted to keep secret for commercial or military reasons. And they worked. While portolans may be inaccurate by modern standards, they succeeded in their objective: helping mariners to get where the wanted to go. Perhaps they are best thought of as topological maps – schematic diagrams such as transport maps, which show the relationship between places, but omit all information that is not relevant to getting the user from A to B.