The timeline of automation

Amid the latest developments in AI and distributed networking, it’s easy to overlook that the evolution of automated vehicles has been underway for nearly a century.  Today, we’re sharing the high points of machine-driven vehicle technology, from 1925’s American Wonder, to the 2018 Audi A8, and beyond. 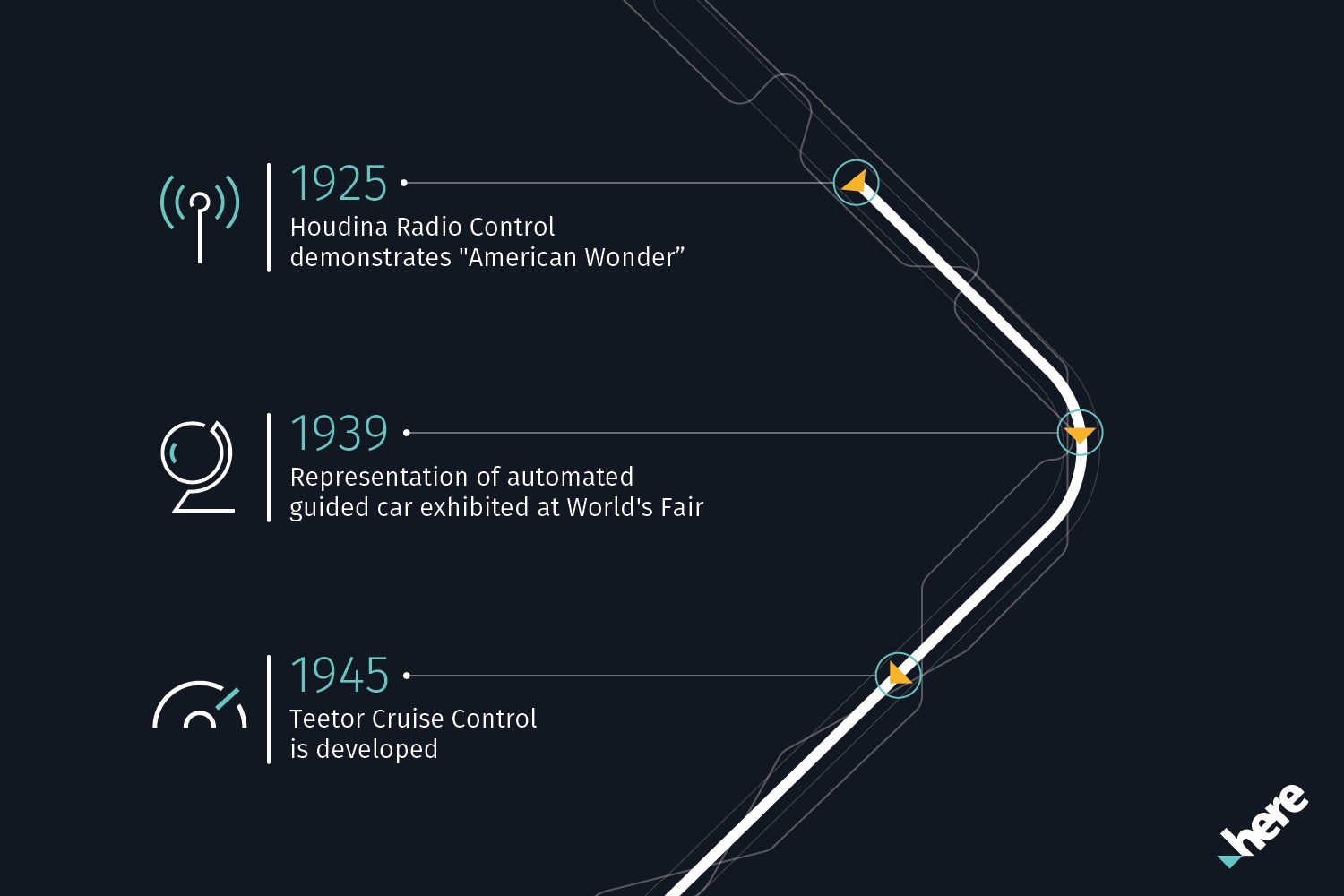 1925
In 1925, Houdina Radio Control demonstrated the radio-controlled "American Wonder" in New York City. The demonstration featured a 1926 Chandler equipped with a transmitting antennae on the hood.  It was operated by a second car that followed it and sent out radio impulses which were caught by the transmitting antennae.

1939
An early depiction of an automated car was Norman Bel Geddes's Futurama exhibit at the 1939 World's Fair.  Geddes’ envisioned radio-controlled electric cars that were propelled via electromagnetic fields generated from circuits embedded in the roadway.

1945
Engineer Ralph Teetor receives a patent for the first modern Cruise Control, which he called the Controlomatic, the Touchomatic, and the Speedostat.  Teetor had spent 10 years experimenting with the device after being annoyed by riding in cars with his Lawyer, who would slow down when talking, and speed up when listening. 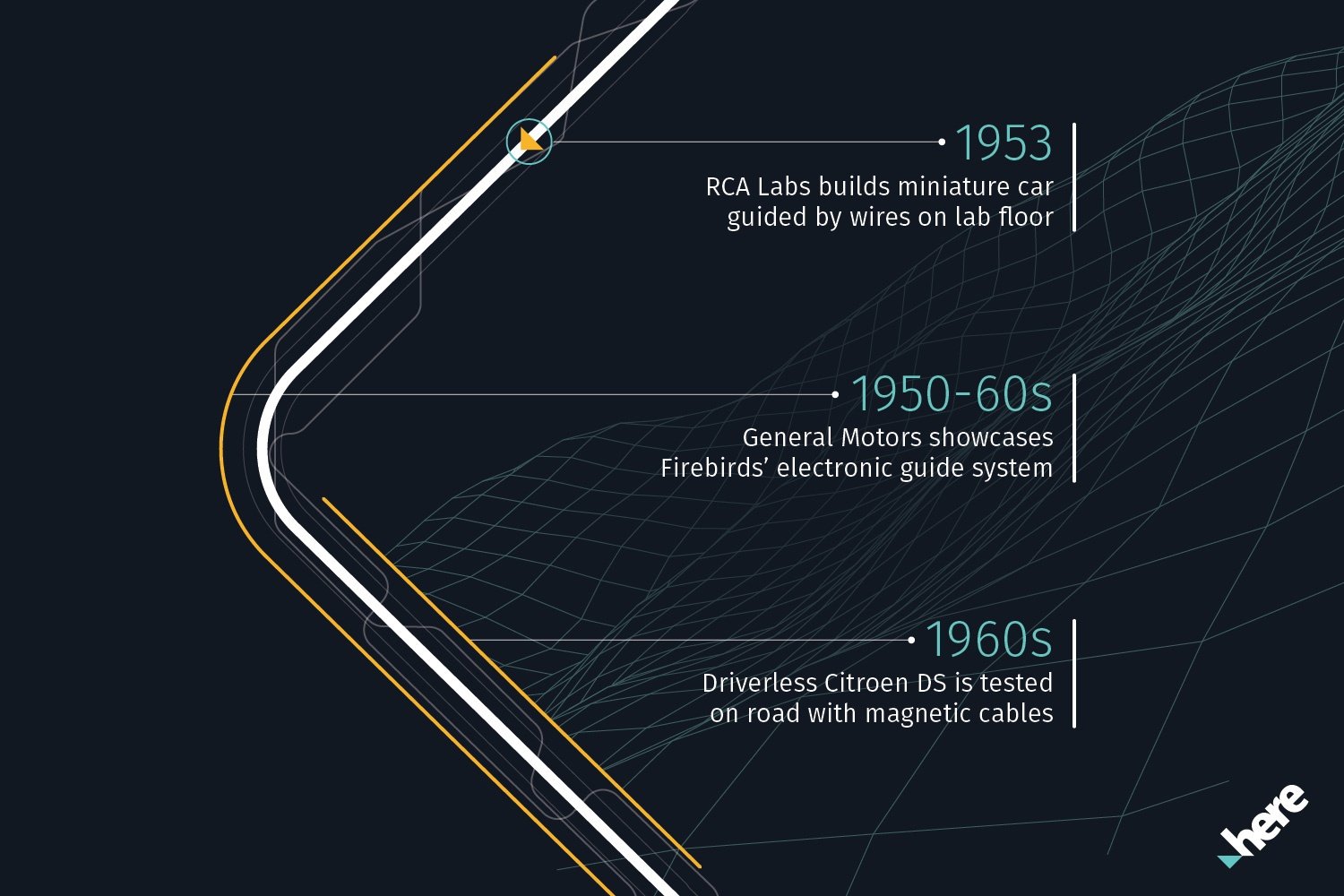 1953
RCA Labs successfully builds a miniature car that was guided and controlled by wires laid in a pattern on the floor of a laboratory. In 1958, a full size system was successfully demonstrated by RCA Labs and the State of Nebraska on a strip of public highway just outside Lincoln.

1950-60s
Also during the 1950s throughout the 1960s, General Motors showcased the Firebirds, a series of experimental cars that were described to have an "electronic guide system [that] can rush it over an automatic highway while the driver relaxes”. The GM Firebird II is equipped with receivers for detector circuits embedded in roadways

1960s
During the 1960s, the U.K.’s Transport and Road Research Laboratory tested a driverless car guided by magnetic cables embedded in the road. It went through a test track at 80 miles per hour (130 km/h) without deviation of speed or direction in any weather conditions. Funding for these experiments was withdrawn in the mid-1970s. 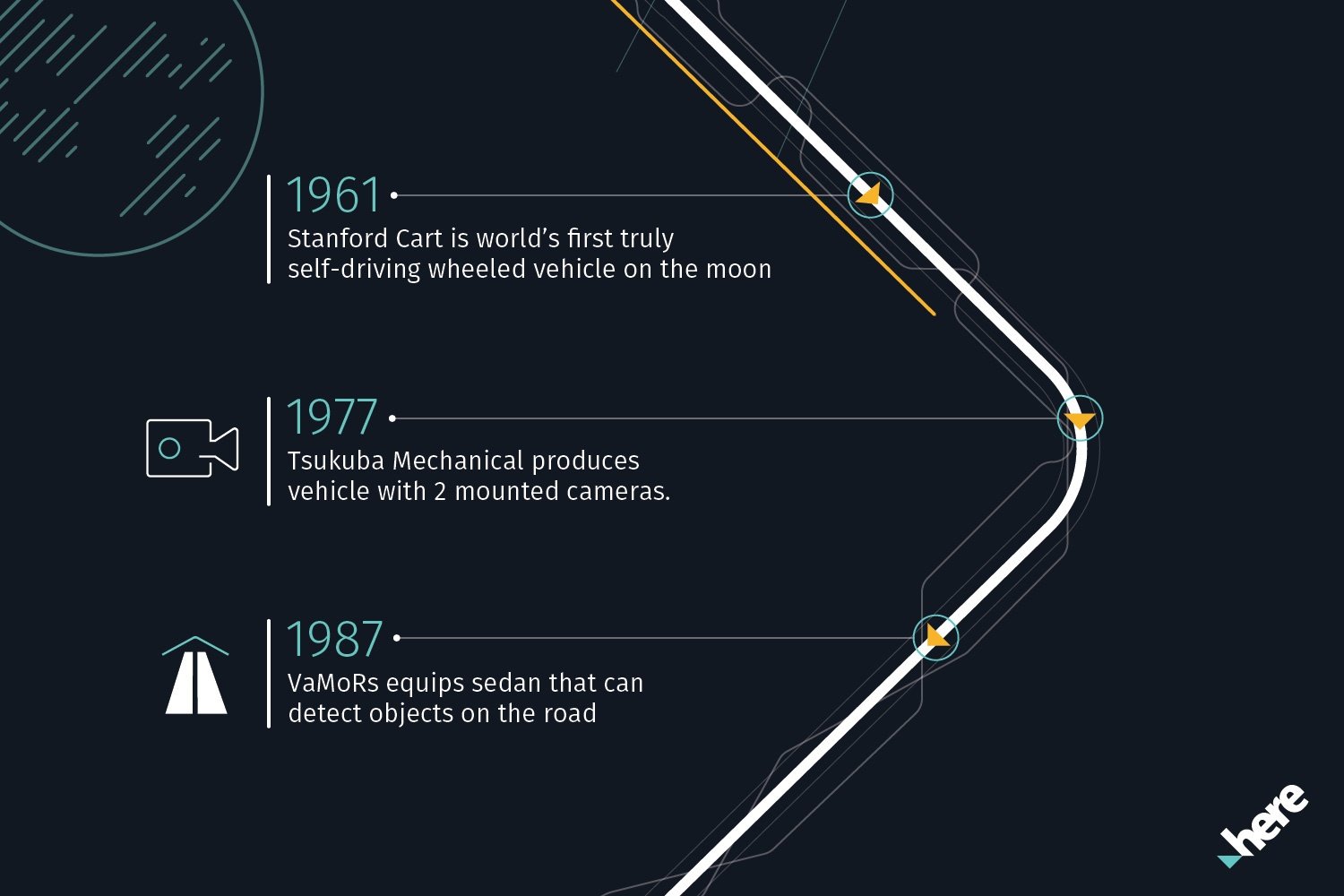 1961
The space race inspires James Adams, a graduate engineer at Stanford, to create a remote-control lunar explorer.  The key issue to be solved was the 2.5 second delay between when a command was sent from earth to when that command was received on the moon.  The result: the first self-driving vehicle using cameras and location detection to navigate.

1987
German engineer Ernst Dickmanns, equipped a sedan with a bank of cameras and 60 micro-processing modules to detect objects on the road—in front of and behind the vehicle. Dickmann’s key innovation was “dynamic vision,” which allowed the imaging system to filter out extraneous “noise” and focus only on relevant objects. Today, this type of imaging is crucial in helping self-driving vehicles identify potential hazards and their locations. VaMoRs proved so successful that it was able to navigate Germany’s famous Autobahn at speeds of up to 60 miles per hour. 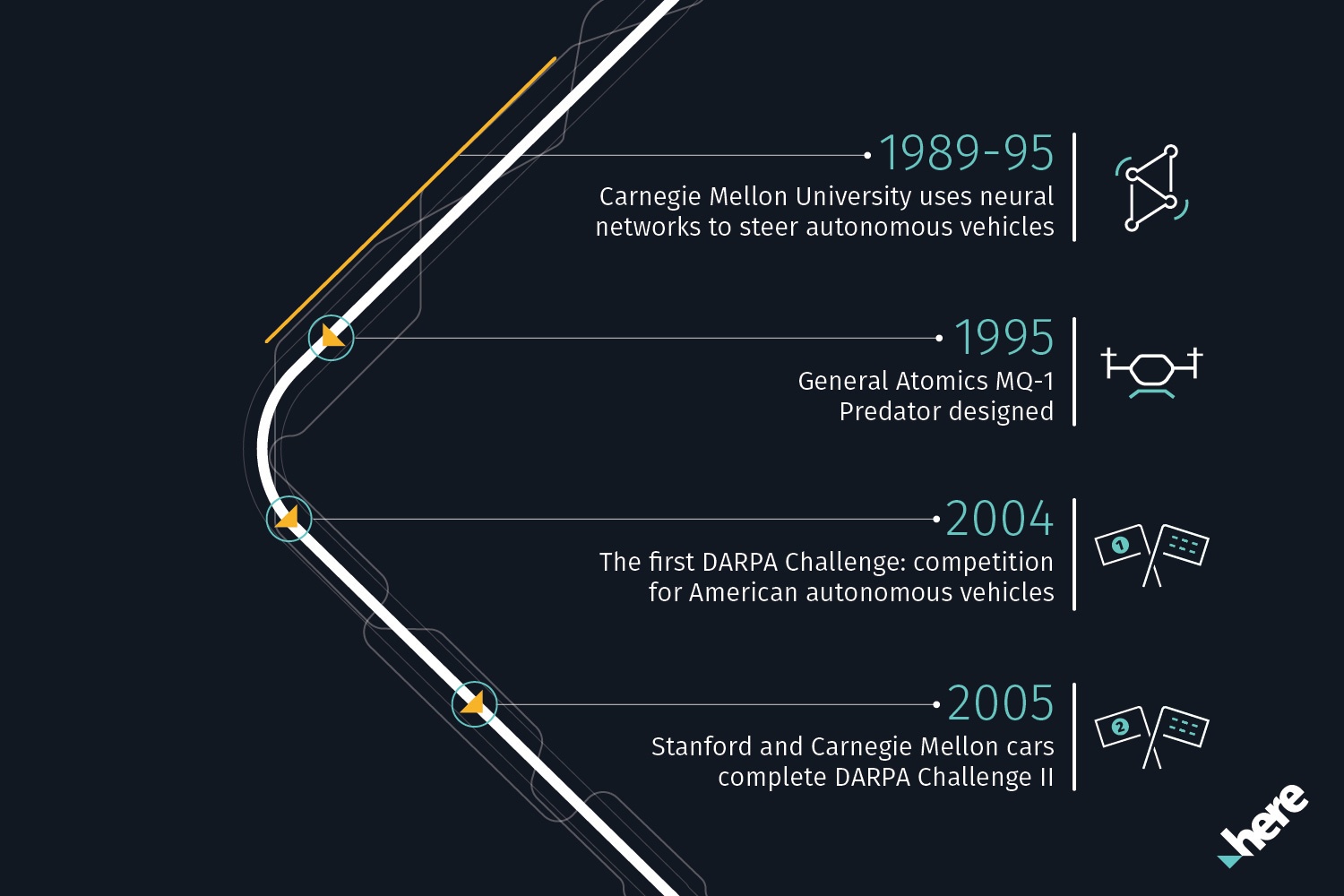 1989-95
By 1989, Carnegie Mellon University had pioneered the use of neural networks to steer and otherwise control autonomous vehicles, forming the basis of contemporary control strategies. In 1995, Carnegie Mellon University's Navlab project completed a 3,100 miles (5,000 km) cross-country journey, of which 98.2% was autonomously controlled, dubbed "No Hands Across America".[40] This car, however, was semi-autonomous by nature: it used neural networks to control the steering wheel, but throttle and brakes were human-controlled, chiefly for safety reasons.

1995
General Atomics releases the MQ-1 Predator, the first modern unmanned aerial vehicle (UAV), capable of 14 hours of continuous flight.  General Atomics developed the drone from the leftovers of a previous reconnaissance program called Amber. While the Predator was remotely controlled by a live pilot, it paved the way for autonomous UAVs like the Global Hawk in 1998.

2004
DARPA Challenge I - The U.S. Department of Defense’s research arm, DARPA, sponsored their first Grand Challenge that pushed autonomous driving technologies forward.  A prize of $1,000,000 was offered to any team that built a car that could autonomously drive itself 150 miles across the Mojave Desert.  No car completed the course, the furthest distance traveled was a mere 7.3 miles.

2005
DARPA Grand Challenge II – DARPA increases the prize to 2,000,000 and the course re-focuses on navigating turns and tunnels over 132 miles.  Stanford and Carnegie Mellon Universities produce 3 cars among them that finish the course within 30 minutes of each other. 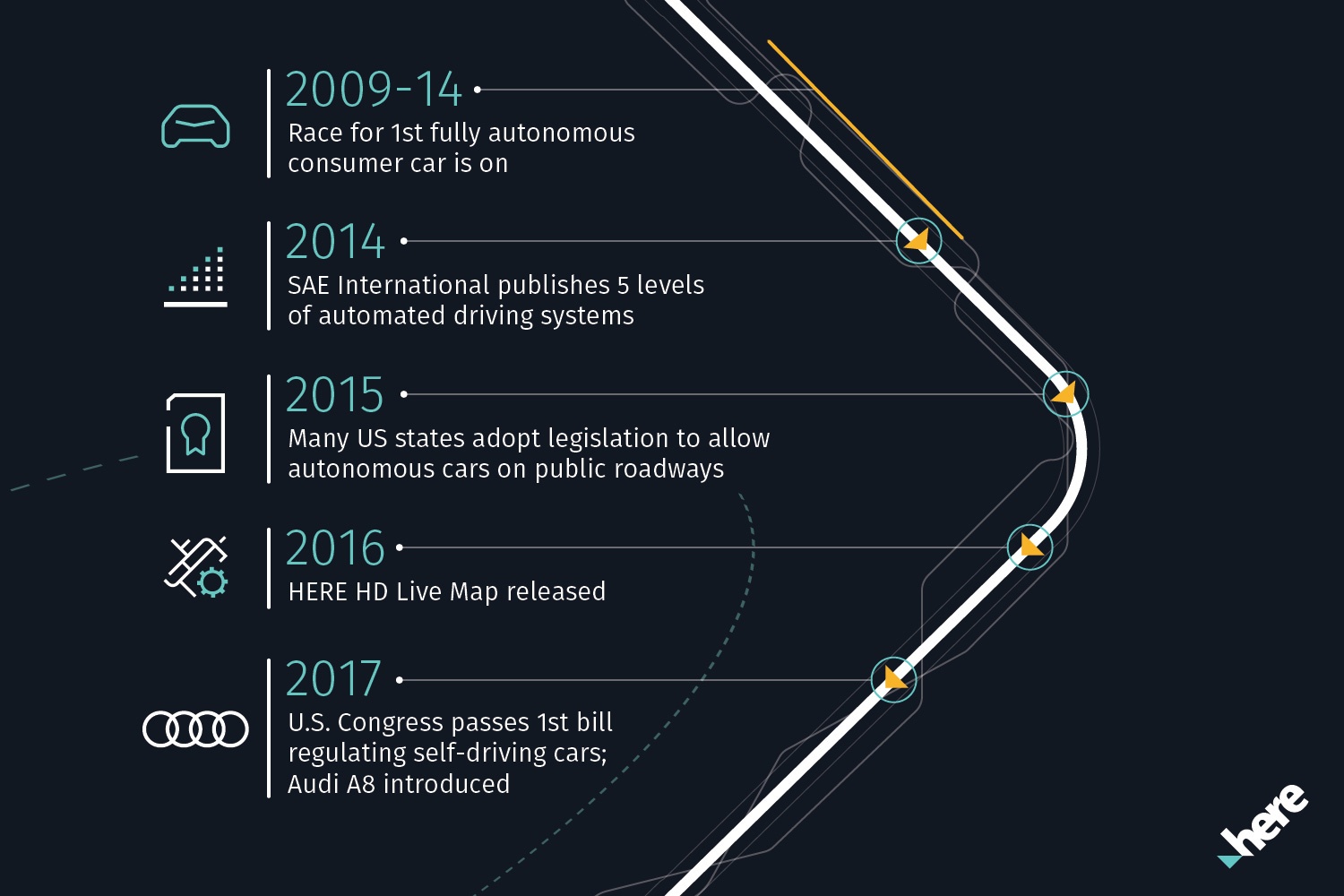 2009-14
The race for the first fully autonomous consumer car is on. Car companies begin partnering with tech companies to give consumers a glimpses of increasing levels of autonomous driving, such as the Mercedes S 500 and the Tesla S.  Early automatic features include hands-free driving on highways and automatic parallel parking.

2014
Defined levels of autonomy – SAE International publishes the 5 levels of automated driving systems based on the level of driver participation needed to operate the vehicle.  The levels range from zero (fully manual) to five (full-time automation).  The U.S. NHTSA adopts the same definitions in 2016.

2016
HERE HD Live Map is released, combining layers of data into an advanced view of the roadway.  The view presents traditional map data, along with analytic driven data based on the live condition of the road.  This mapping technology enables a pathway for consumer cars to approach higher levels of autonomy on the roadway.

2017
U.S. Congress unanimously passes first bill toward regulation of self-driving cars.  The Safely Ensuring Lives Future Deployment and Research In Vehicle Evolution Act (SELF DRIVE Act) allows for car companies developing autonomous vehicles, and vehicle manufacturers to put as many as 100,000 self-driving cars on the road for testing and helping to determine regulation.

Audi introduces the Audi A8.  The flagship vehicle is equipped with the most powerful in-car navigation system produced to date, and has the capability of “Level 3” autonomous driving. 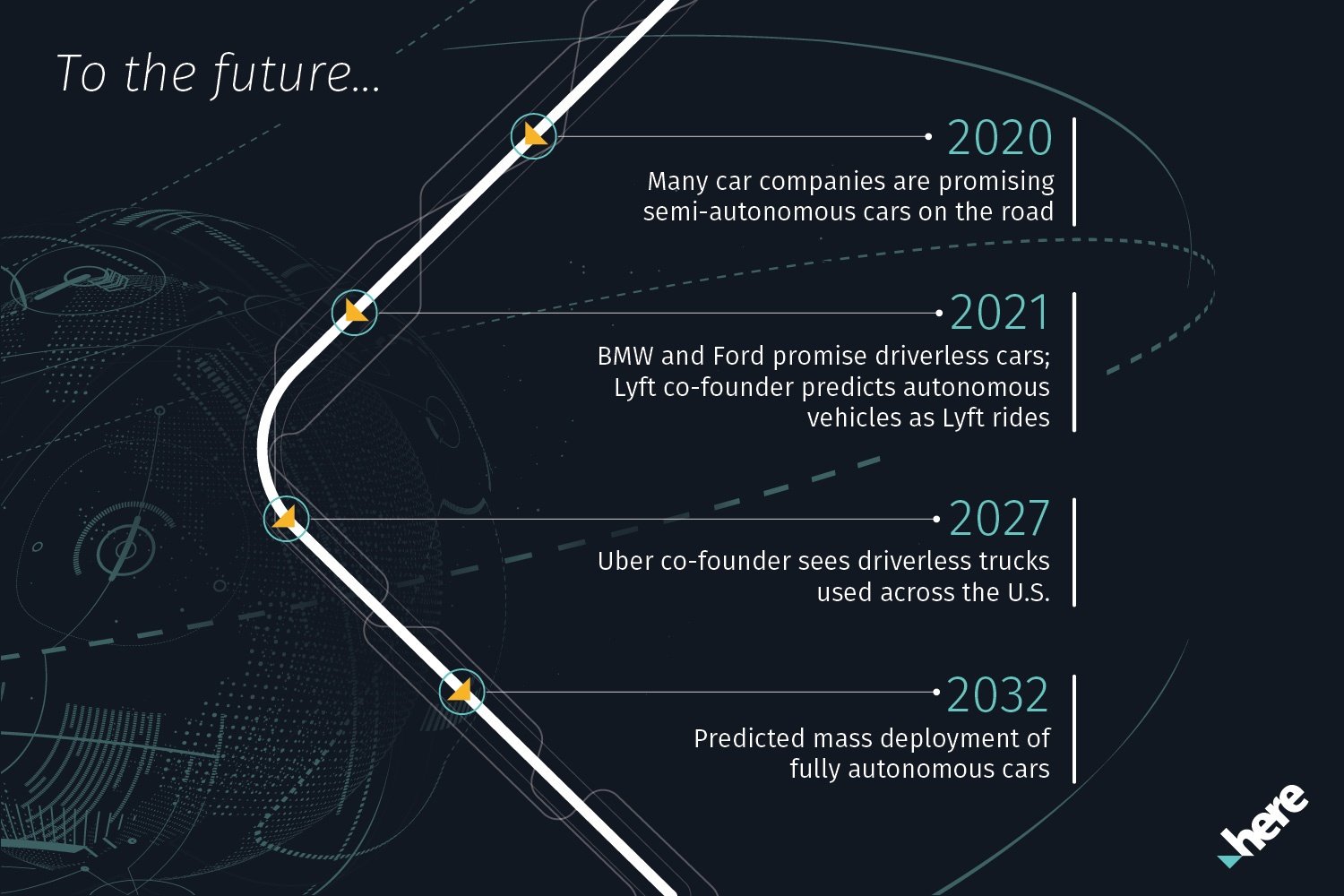 2020
Car companies such as Nissan, Toyota, and Renault are promising autonomous cars on the road, capable of entering/exiting highways and navigating city intersections.

John Zimmer, Lyft co-founder, predicts that the majority of Lyft rides will be in autonomous vehicles by 2021

2032
Most technologists and car companies alike agree that fully autonomous cars, that is, those that need zero driver intervention from pick up to drop off will be in mass deployment and part of consumer routine within 15 years.