The Expo of the Future

On a stage in Greenpoint, Brooklyn, a man in a gray t-shirt and white sneakers has his hands open as he addresses the audience. He’s discussing how everyone in the room is, at that very moment, contributing to the future – and that this is nothing new. The man is Dennis Crowley, and he is the co-founder of Foursquare.

The Worlds Fair Nano, an ongoing two-day celebration of technology, visited New York last weekend. Like the World’s Fairs of old, the expo is aimed at bringing the future into focus in an exciting way, and sharing it as a tangible commodity. Attendees were invited to experience food, music, technology and expert-speaker sessions all prefixed with, “The Future Of…”.

The speakers were experts on a range of topics, including neuroscience, artificial intelligence, robotics, and quantum mechanics. Those that appeared had credentials as landmark entrepreneurs, PhDs, CEOs, and teachers of the next generation of technology professionals. As the topics varied, one common theme was common: big data. 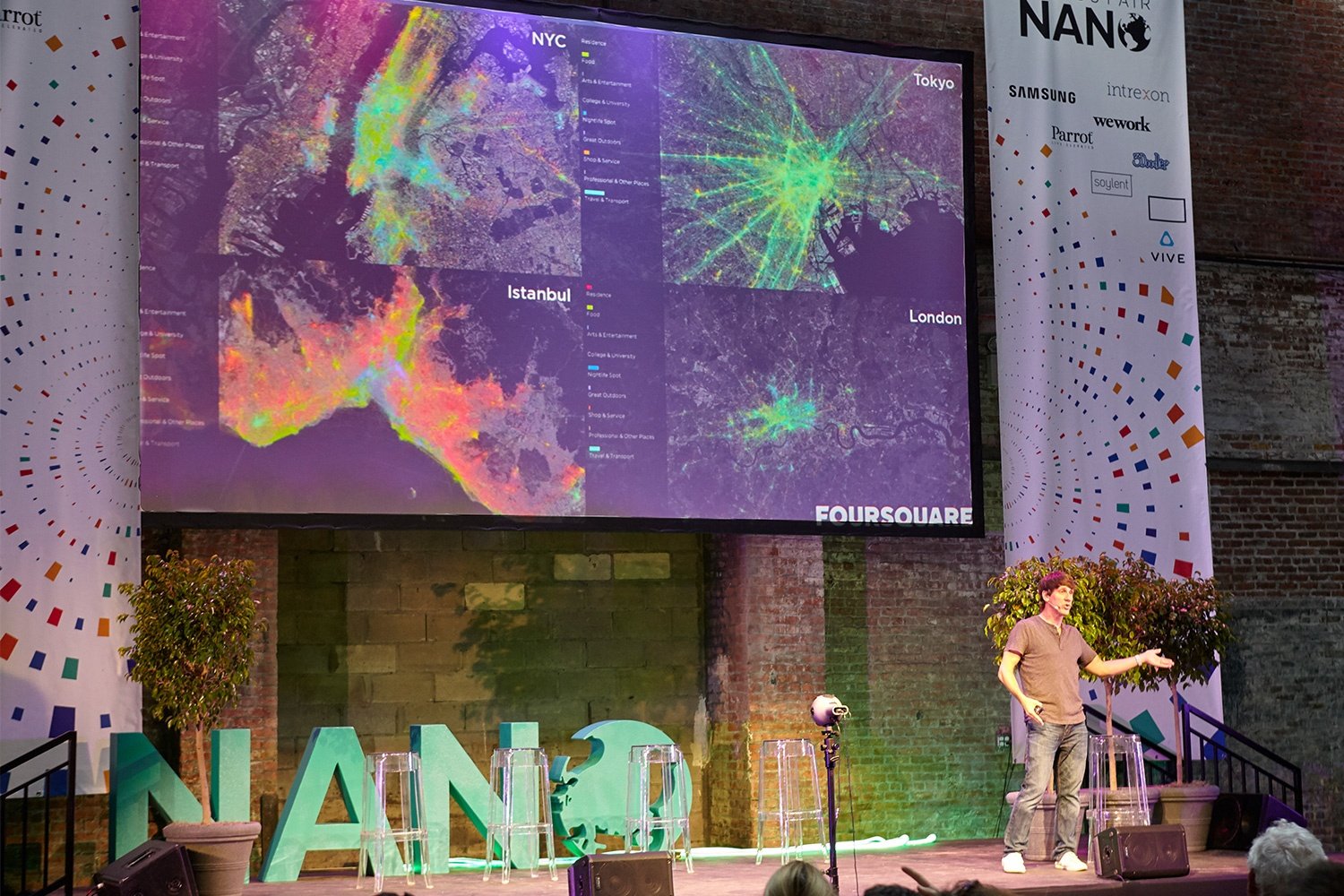 “The Future of Location Data”, was Dennis Crowley’s presentation on how we collect and interpret data. Foursquare was one of the pioneers in collecting location data from users, then re-sharing that data to a network to help other consumers make more informed decisions. At its peak in 2015, the app had 55 million monthly users. More recently, Crowley has turned his attention to the data being collected.

“No matter what we’re doing, we’re all contributing to this future of data ... If you’re not paying attention to me and doing something on your phone, you’re producing data. As long as your phone is in your pocket … you’re generating some form of data that is helping companies to build interesting services, or to invent the future.”

Crowley noted that automated cars aren’t solely learning from defined rules, but additionally from how consumers drive. That learning comes from the data that has been collected in the past, and is being added to every day. He admitted that were he giving the same talk even one year ago, self-driving cars were closer to crazy-talk. Today, he noted, it’s crazy that we’re still driving ourselves.

Whether the subject was location data, bio engineering or quantum computing, multiple speakers made note of the incredible amount of data that continues to be collected from all the sources around us. The enormity of that data calls for better algorithms, and more powerful computers. 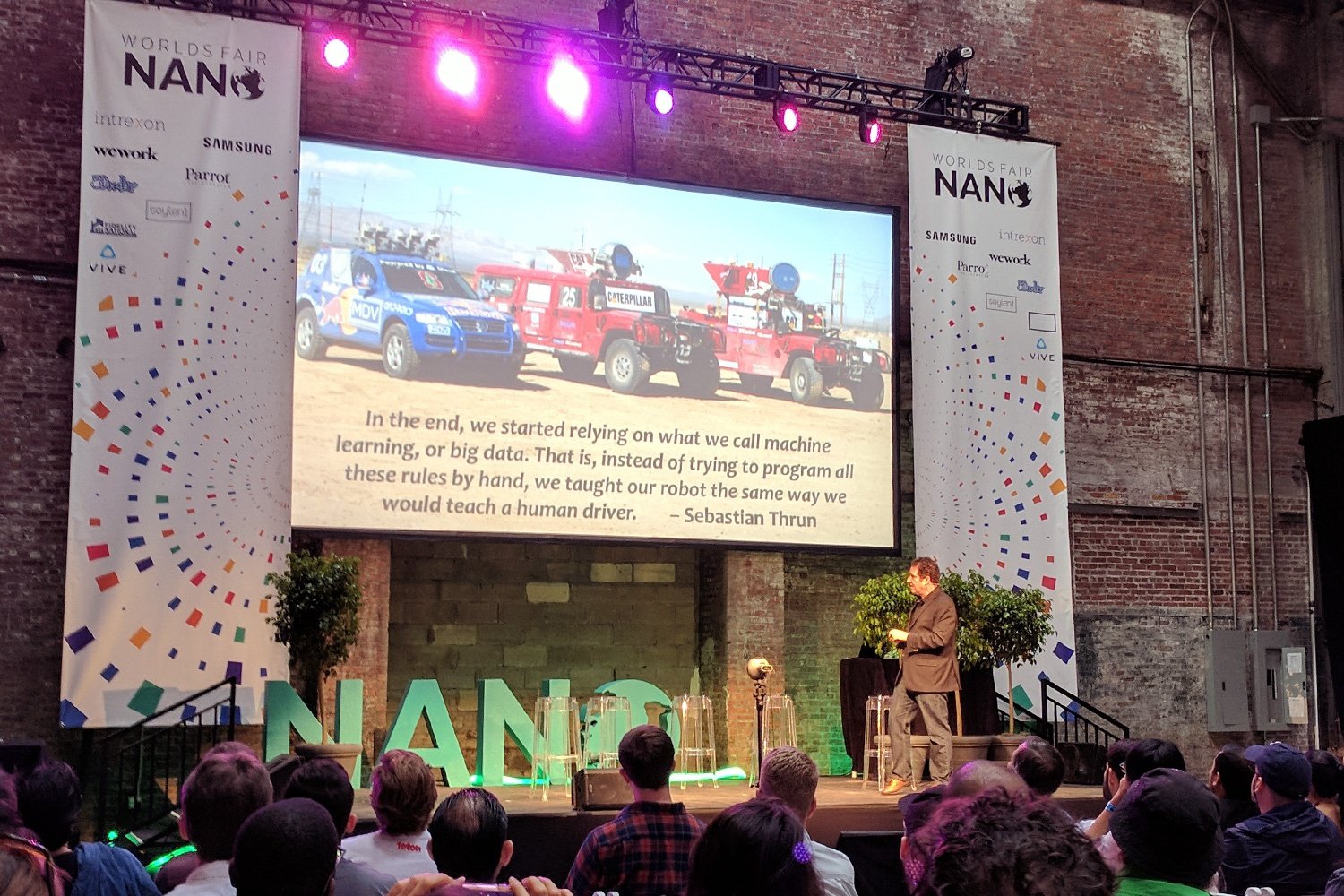 Hod Lipson, Professor of Engineering and Data Science at Columbia University, presented his view of the future of Robots and Artificial Intelligence. He opened with a provocative statement.

“Probably you, certainly your children and your grandchildren, will never need to learn how to drive. This will change your lives in a profound way, not just your lives, but also e-commerce, where you live, and what you do for a living.”

Lipson made an insightful point about the challenge of programming robots to perform tasks that humans do every day. The core of the difficulty, he noted, citing the example of teaching an autonomous car to drive, is that teaching a computer to navigate a city by providing a set of rules is a monumental task. With that approach, thousands and thousands of rules must be written for the computer.

He emphasized the difficulty of that approach by citing the first year of the DARPA Grand Challenge, where an autonomous car encountered a road that went under an overpass. The car stopped and shut down because it could not identify the situation, and had no rule to navigate through the problem.

The alternative, and in his opinion more reliable approach, would be to have an AI teach itself how to navigate based on its capabilities, the data and the environment. In that way, an AI can learn to drive more efficiently by combining a mix of live data, historic data, and a smaller set of rules.

The picture that the Worlds Fair Nano speakers began to put together has great potential for multiple industries. Systems that use large collections of data combined with ever-growing processing power can be used to make the world more efficient, and can do so faster than ever before. As Professor Lipson said:

“The data is the fuel, and algorithms are the engine. They’re both useless on their own, but when you put them together, they can take off.”