Jams, game theory and equations: the science of traffic 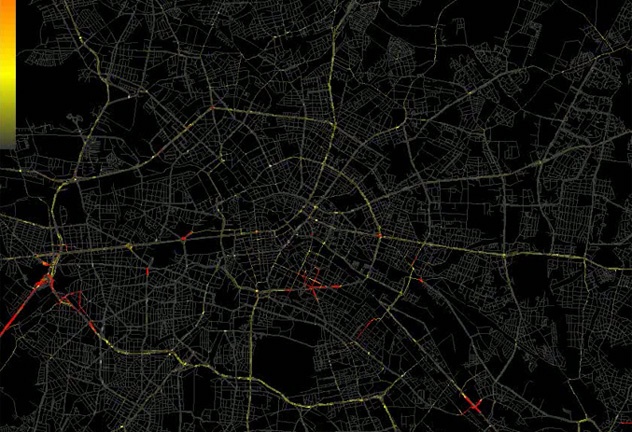 “Going on a trip, everyone needs to decide which route to go: Some use gut feeling, some use paper maps or navigation devices with no traffic information, and the wisest ones follow traffic-aware navigation.”

Dr. Daniel Rolf has been working in the field of mapping and traffic science since he left university and has been working for HERE and its antecedents for 10 years. If there are matters that we still don’t understand about traffic and the science behind it, you can bet he’s on the case.

“When you’re blind to traffic conditions, you will take the route you personally believe is the fastest one or a traffic-blind navigation device decides for you assuming you were driving close to the speed limit all the time. Both ways are very likely to yield a route that is suboptimal.”

Unfortunately, since a lot of people still do not use traffic aware navigation, they might all go the same routes between places or take strange detours. Finally, they impede each other, so this creates bottlenecks, and congestion and traffic jams arise.

Gut-feeling drivers (mistakenly) trust to their intuition and experience and stick to the routes they think are optimal. Of course, though, the fastest route changes over the course of the week and the day. A route might well be the fastest at midnight, but the picture changes as more drivers join the system. And then the smallest incident – someone’s car stalls at a green light, for example – can change the optimal route in ways even the most experienced drivers can’t anticipate.

Traffic-blind navigation devices are similar to a special kind of gut-feeling drivers: the-road-is-just-for-me drivers. They always believe that there is no-one else on the road, they can travel at the speed limit, and they never need to wait at a junction due to traffic lights or way regulations. 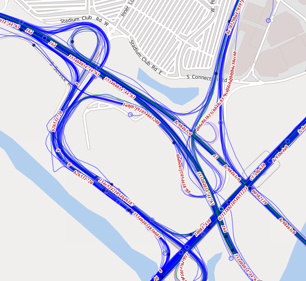 “It’s like you need to go through an enchanted forest with ever changing trails.” Daniel observes. “You need something with an omniscient view that guides you through the forest and does not lose its mind.”

By giving people routes calculated from real-time traffic data, HERE directs traffic away from over-used roads and onto under-used roads.

Effectively, the HERE Platform helps us evolve. It makes us more intelligent: if the winning condition is getting to our destination quickly, then we better be prepared to deviate and co-operate.

If traffic is controlled co-operatively, with knowledge of where congestion exists, then we escape the bottlenecks, cut through the back streets and get home quicker. You’ve taken a longer route (minor #fail) but got to your destination faster (#WIN!). 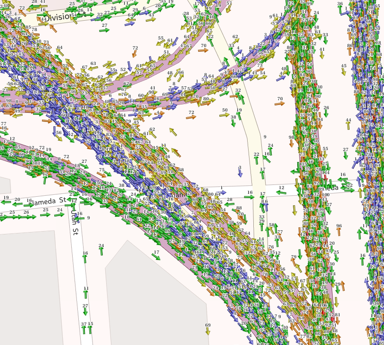 In fact, everybody wins once there are more than a handful of traffic-aware cars. Just removing a few cars from the traffic jams makes all the roads a lot faster. “Traffic simulations of the city of Berlin suggest that at around 20 per-cent of vehicles with traffic-aware navigation,” says Daniel, “everyone’s journey times might be cut by up to 30 per-cent. And the results just get better from there.” Good job that HERE is either directly dealing or in talks with almost every major car maker, then. 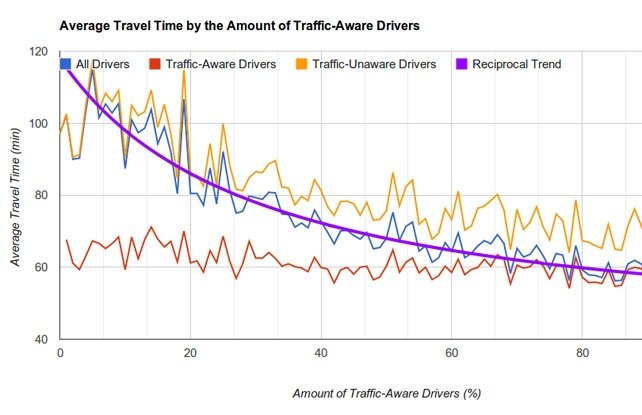 The more people who have traffic-aware vehicles, the closer the system comes to a Nash Equilibrium, a state where everyone wins. It makes rational sense to follow the directions given because it will always give you the fastest journey time. If you deviated from that route, you’d end up with a slower journey.

Traffic-aware navigation is a more successful strategy for removing traffic jams than adding more capacity to the roads, by the way. This is something we want to avoid anyway for environmental reasons, but also, it doesn’t actually work on a predictable basis.

Strange enough, opening new roads can even actually increase traffic jams; closing down existing roads can make it smoother. You can thank Braess’s Paradox for that: everyone thinks the new road will make their trip faster, so they use it, but then it simply creates new bottlenecks somewhere else.

“It’s a bit like switching queues in the supermarket at the moment a new till is opened,” says Daniel. “For the moment, it looks tempting and now everyone jumps over and they bump their carts into each other and loose time.”

The next stage is prediction. We know that traffic follows patterns. That, at 8am and 5pm, for example, there will be a rush hour on weekdays, when jams are especially likely. That the traffic on Monday will be more like the traffic on Friday, than it was on Sunday. 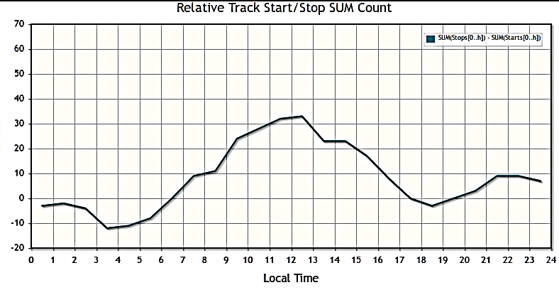 The HERE Platform builds on those patterns and its emerging intelligence about future traffic every day. This Thursday at this time will probably be like last Thursday, so it calculates optimum routes based on that knowledge.

Then there are unexpected events. There’s a traffic accident at a key junction. The real-time system knows about that because it sees traffic slowing and stopping near the junction, and because it has access to external sources, like municipal authority data.

“We know to direct people away from the incident,” says Daniel. “But also, we know the likely recovery time from an incident.”

If traffic is normally back to normal after an incident in 30 minutes, and you’re 35 minutes away from the black spot, then HERE will keep you on the same route. If you’re 25 minutes away, then it will calculate the time difference involved between diverting you or not, and works out your best chances of a quick journey.

Dancing in the rain

The next step is to factor weather into the traffic models as part of route planning. If, on average, rain slows traffic by 15 per-cent, then it totally changes the comparison between last Thursday and today. Understanding what is then the best route is already feasible and a likely next step.

There’s also a better understanding of the calendar in progress. If next Monday is a public holiday where you are, then the traffic will be more like a Sunday than a normal Monday. The more dimensions we’re able to overlay across the map of whatever “normal” travel looks like, the better for everyone. 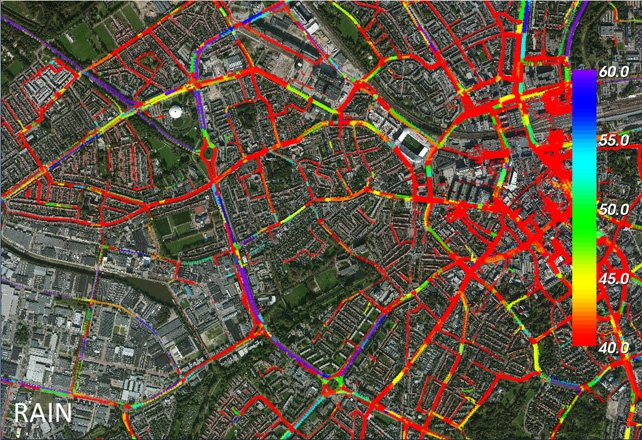 And more. “Then we start to look at the car’s sensors. We start to know the weather before the weather authorities do, because we can see which cars have their windscreen wipers or their headlights switched on.”

We may never totally eliminate traffic jams. “Sometimes it’s actually sensible to sit in a tailback. Like on the access road to a fast highway, for example,” Daniel concludes. But we can certainly reduce it, and with more new cars with HERE Platform insight entering the system every day, then the future already looks brighter.