The age of autonomous exploration

The age of autonomous exploration

When the original Mayflower left one Plymouth to find another, it had 130 people on board. The next will have none.

A romantic could conclude that America was founded on exploration. One could draw a line from the Moon landing back through westward expansion and ultimately the landing of the Mayflower at Plymouth rock. The Puritan Pilgrims preferred to venture to the New World rather than stay in Europe and live among people who objected to the Puritan's hardcore religious devotion. Likewise, this new Mayflower aims to expand our horizons on two fronts, exploring both the Atlantic, and the limits of autonomous technology.

The journey of the Mayflower Autonomous Ship (MAS) is a group effort being led by ProMare, a non-profit charity established to promote marine research and exploration. The ship is being designed by Whiskerstay Ltd and M Subs Ltd, and built by Aluship Technology in Poland. The MAS is designed with a hydro- and aero-dynamic trimaran form factor. Its primarily aluminum construction keeps it durable yet lightweight; at 5 tons, it's less than 3-percent the weight of its namesake. And at 15 meters, it's about half the length. The MAS is powered by solar panels, and a single wingsail harnesses wind power and adds to overall visibility for other ships crossing the Atlantic. The vessel should be able to reach speeds of 20 knots, or 23mph, compared to the original's 2.5 knots.

To navigate across the Atlantic, tracing the route the Pilgrims took to find their new home, the MAS will use state-of-the-art inertial navigation and a precision GNSS positioning system. It will have a full suite of the latest oceanographic and meteorological instruments, a satellite communications system and 2D LIDAR and RADAR sensors to keep it on course and out of the way of incoming ships, whales, and other hazards. Should a hazard be detected, the MAS will rely on its “brain," the IBM Power Systems Operational Decision Manager, to help decide whether to change course, or speed out of the way by drawing additional power from its on-board back-up generator. 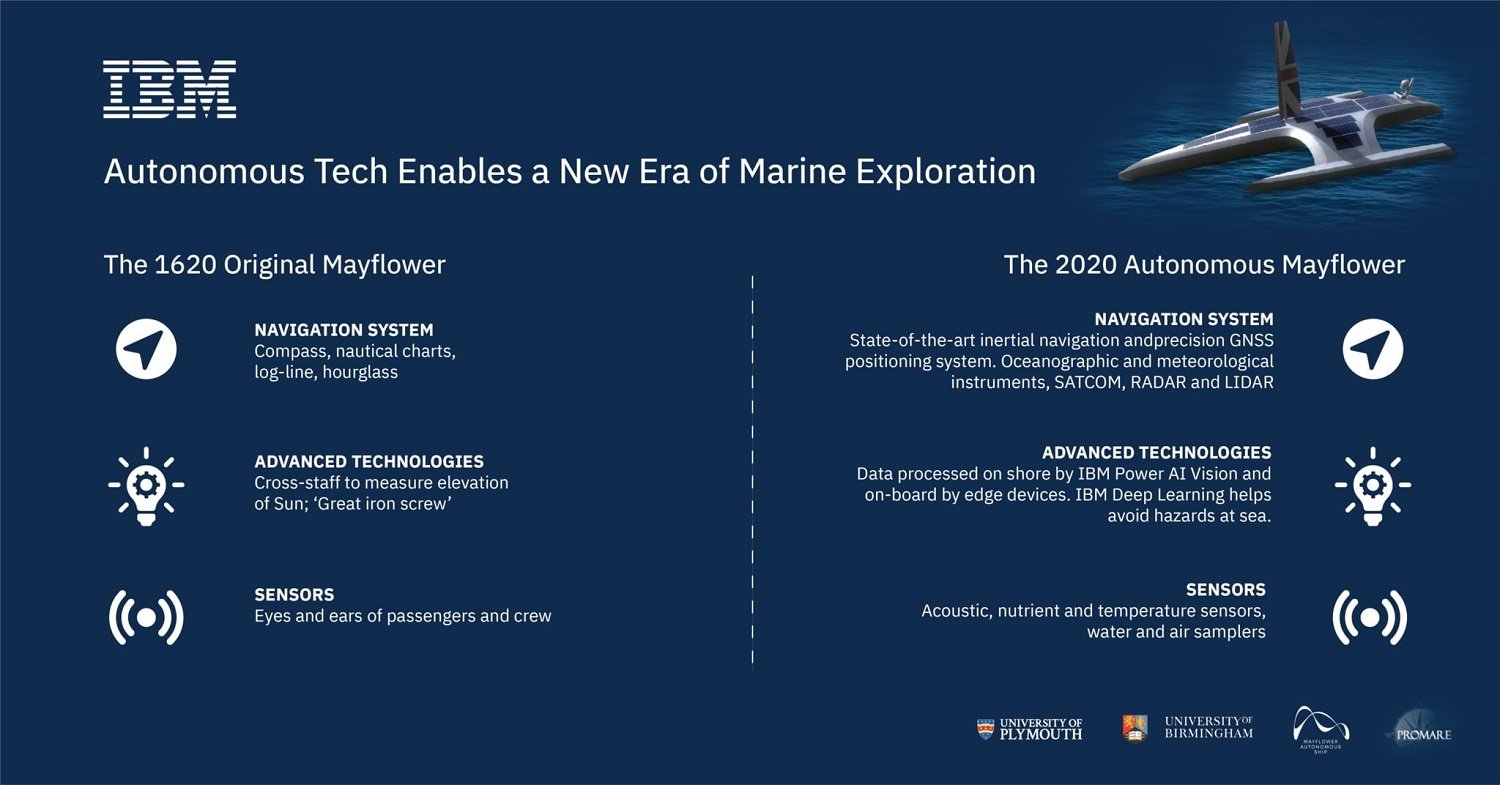 While no humans will be onboard this Mayflower, coming along for the journey are three research pods provided by the UK's Plymouth University. The pods will carry scientific instrumentation to conduct persistent research in meteorology, oceanography, climatology, biology, marine pollution and conservation; gathering data that scientists need to understand and protect the seas from pollution and climate change.

Though the MAS will have no human crew nor passengers, the University of Birmingham's Human Interface Technologies Team plans to open the mission to “virtual pilgrims" around the world via a mixed reality experience using VR and AR technologies. And Brett Phaneuf, Founding Board Member of ProMare and Managing Director of the MAS hopes that, like the original Mayflower, this one will inspire others to follow it across the ocean. The MAS and autonomous ships like it should be able to spend more time on the sea than human crews, gathering information and doing research on the 95% of the ocean we have yet to explore.

The original Mayflower played a key role in the founding of America, drastically changing the course of the 400 years following it's voyage. Everyone behind the Mayflower Autonomous Ship hopes and believes that their version could have the same magnitude of effect - not just with regards to exploring our world, but in discovering and testing more uses for AI technology to improve our understanding and control over our environment and future.