Squeezing countries onto 2D maps: The true size of Africa

Squeezing countries onto 2D maps: The true size of Africa

Maps do a fantastic job of explaining the world we live in, but did you know that something is always lost in translation when it comes to replicating the shape and size of a country on a 2D map? Compromises like the Mercator projection enable maps to fit on a flat plane, but it's far from perfect and as a result countries closer to the equator like Africa appear a lot smaller than they actually are. 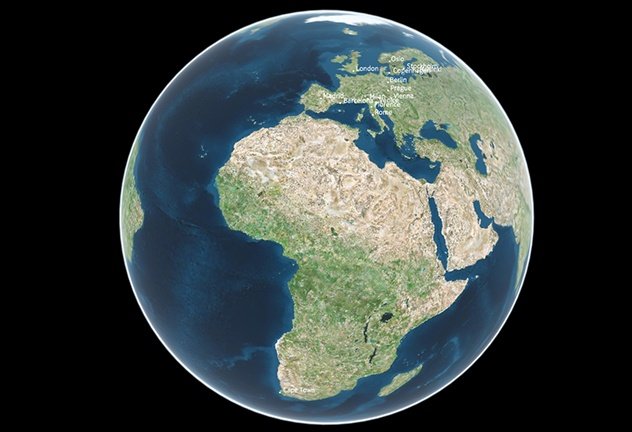 There are loads of different ways that countries and continents can be arranged to fit on a flat plane, but however it's done compromises will be made. Just try wrapping a football with a rectangular bit of paper and see how you get on; whatever you do you'll end up folding, cutting or changing the shape of the paper to fit the sphere. The same is true for mapping, and it means atlases are never truly accurate as a result.

The Mercator projection is an almost ubiquitous map projection that's often used for nautical and more general purposes, and it's a great example of how much the shape and size of some countries can differ from their counterparts on a globe and in reality.

Although everything looks roughly the right shape, the way countries are squeezed onto the map means there are bigger and bigger distortions as you work your way to the poles, and as a result countries closer to the equator appear much smaller than those around them.

Areas further North and South of the equator get stretched out: while the ones in the middle get compressed. It’s perhaps no accident that the general acceptance of the Mercator projection corresponds to the inflation it gives to the world’s most prosperous nations! 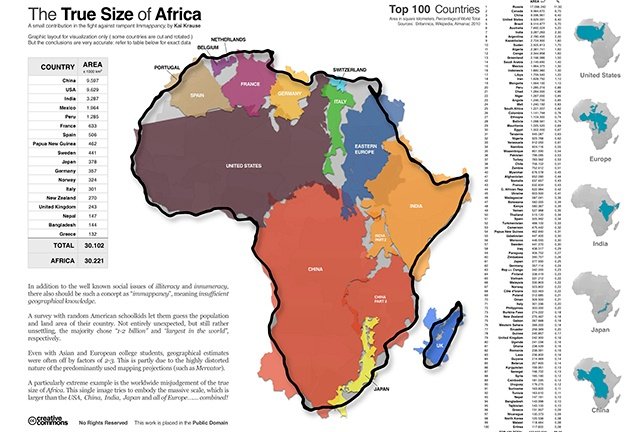 So while Africa looks broadly similar in size to Greenland on maps that use the Mercator projection, in reality it's actually a colossal 14 times larger. Africa is so massive, in fact, that it occupies the same land mass as the United States, China, all of Europe, India and Japan combined - something that's near impossible to spot when looking at the countries on nearly every map that’s widely used across the world.

The True Size of Africa, highlighted by The Economist, shows just how big Africa actually is, and shows how easily all of the countries above can squeeze into the same physical area. The image, put together by Kai Krause to offer "a small contribution in the fight against rampant Immappancy", reveals just how much the Mercator projection distorts the size of different countries.

So next time your pour over a map, wondering about how big the country you’re visiting is, spare a thought for those closer to the equator that may actually be a lot bigger than they first appear!