Meet the test towns perfect for cars without drivers

Meet the test towns perfect for cars without drivers

We’ve seen autonomous tech take giant leaps over the past couple of years, but there needs to be a lot of testing if driverless cars are to become an everyday reality. What makes an ideal testing ground and how could things change in the future? Read on as we take a look at some of the latest testing locations for autonomous cars.

Rather than attempting to find towns and cities that meet all the criteria for testing autonomous cars, along with getting the approval of national and local governments, in some cases it’s simply easier to start from nothing and build a town especially for autonomous cars.

The Mcity Test Facility in Michigan is the perfect example, with the University of Michigan working alongside the Michigan Department of Transportation, HERE and multiple car manufacturers such as Toyota, Nissan and Ford. Together, we are enabling the design of a custom-made town that lets automakers test their cars without having to mix with regular vehicles and unsuspecting residents. The test facility covers 32 acres of land, and includes almost everything you’re likely to find in a regular town – including different road surfaces, single-lane roads, roads with two, three and four lanes, tunnels, roundabouts and plenty of straights, twists and turns. There are road signs, lighting, bike lanes and buildings, and it provides companies with the ideal platform to push the latest connected and autonomous tech to the limit in a completely safe environment.

The perfect town for autonomous cars isn’t just about mimicking the environments we already have, and that’s where Babcock Ranch in Florida comes in. The 18,000-acre site will be completed in 2017, and has been designed to be the world’s first new town where solar energy supply actually outstrips energy consumption. In a world where electric cars are becoming increasingly popular, the ability to provide residents with up to 74.5-megawatts of clean and renewable energy is a key selling point, and could power the next generation of autonomous cars without detriment to the environment.

Solar energy isn’t the only thing that’s appealing about Babcock Ranch, either, with developers also planning an advanced public and private transportation system where autonomous cars are claimed to be the backbone of the community when it comes to moving both people and goods around town.

Creating a completely new town isn’t always feasible, not least because of the requirement for large swathes of land, planning permission and other issues, and even then it may not be the best environment to test out the latest technology. Anybody accustomed to navigating regular cities will attest to the fact that almost anything can and does happen, and that’s why automakers have also been running autonomous cars in cities all around the world.

As we reported last year, the US has been particularly accommodating when it comes to testing driverless vehicles, with Nevada the first state to introduce autonomous vehicle-friendly legislation back in 2012. Since then we’ve seen California and Washington, D.C follow suit, along with test sites all around the world.

The UK has welcomed autonomous vehicles to four different cities – Milton Keynes, Coventry, Bristol and Greenwich (London) – and although the sites are within a few hundred miles of each other they couldn’t be more diverse. This is what the testing is all about, giving autonomous vehicles the opportunity to get to grips with different environments and situations, from the hustle and bustle of Greenwich to the innovative – in terms of UK cities at least – layout of Milton Keynes.

Other locations for testing around Europe include Sweden, France, the Netherlands and Germany, with HERE’s HD mapping playing a part both in Europe and further afield. As we explained last year: “The HD Map is a crucial component of automated driving technology, helping highly automated vehicles precisely position themselves on the road”, and we’ve seen HERE at the heart of testing in Michigan, the autobahn A9 in Munich and the Francilienne (N104) between the A6 and A10 motorways, South of Paris.

Google’s self-driving cars are also taking testing to the next level, with the latest test location in Phoenix, Arizona providing far harsher conditions than anything we’ve seen before. The proving ground offers arid, desert-like conditions and extreme temperatures that can push sensors and the vehicles that house them to their limits, and if Google can make them work here, the chances are they’ll work anywhere. It’s a theme Google has been trying out for the past year, also introducing testing in Kirkland, Washington, in conditions that are far wetter than other testing sites.

Honda has a slightly different approach to testing, taking over the decommissioned Concord Navel Weapons Station in order to put autonomous cars through their paces. The abandoned suburb of San Francisco offers five acres of land, with around 20 miles of roads that mimic everything we see in the real world. While the GoMentum Station (as it’s been dubbed) may not see children, cyclists and other unexpected hazards risking life and limb in front of cars, local wildlife, numerous different road types and road furniture make it the ideal environment for Honda to test its cars safely. 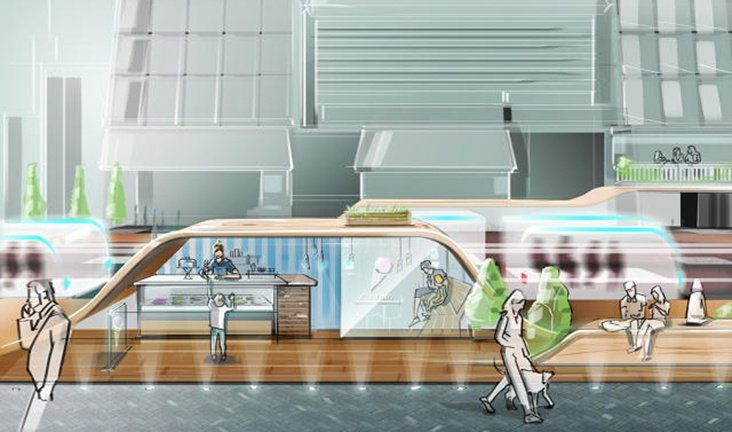 It’s not just inner city roads that are likely to change with the introduction of driverless cars though, and according to design studio Pensa we could see cities radically transformed for pedestrians too. Taking the US as an example, there are an estimated one billion parking spots, with cars numbering around a quarter of that figure. That may be necessary while people are still manning the controls, but when cars can take themselves off to the nearest empty parking spot when you go for lunch, we won’t need a fraction of that number.

That means we could see big changes to roadside parking, with Pensa’s Mark Prommel telling Fastcodedesign: “If you’re not worried about standing on the edge [of the road] and being hit, or the noise, or the pollution from vehicles, you can think of this third place as a place to sit". Could we see laybys turn into tiny cafes, shops or other useful public areas? Pensa certainly seems to think so.

Either way, it’s great to see the impact that autonomous cars could have on our lives, not just with regard to actual travel, but with the thought that’s currently going into planning – from new towns to the redesign of existing cities.