Mapping a city’s problems – and its solutions

Mapping a city’s problems – and its solutions

When London suffered an outbreak of cholera in 1854, few would have guessed that the key to containing and resolving the epidemic lay in a simple tool: a map.

But that’s exactly what English physician John Snow used to find the root of the problem. Skeptical that the disease was caused by miasma, or bad air, as was commonly considered the culprit, Snow surveyed the locals to determine where the occurrences were concentrated, ultimately discovering that the infection was spread from a single water pump. The pump was disabled, the spread of illness halted, and a new way to solve urban issues came into being.

Today, Snow’s approach is still used around the world, and not just for health problems. Maps are helping researchers visualize and better understand the issues facing modern cities, from high temperatures to pollution, and giving governments and organizations the information they need to find solutions.

In Dallas, the Texas Trees Foundation is combating the city’s heat using maps, but not meteorological charts. Rather, the group has used aerial imagery and its own investigations to uncover Dallas’ “urban heat islands”: metropolitan areas that are warmer than their surroundings due to human activities and a lack of vegetation, such as trees. By establishing which areas are the most built-up and have the least tree canopy coverage, they’ve been able to illustrate the neighborhoods most susceptible to the heat island effect. 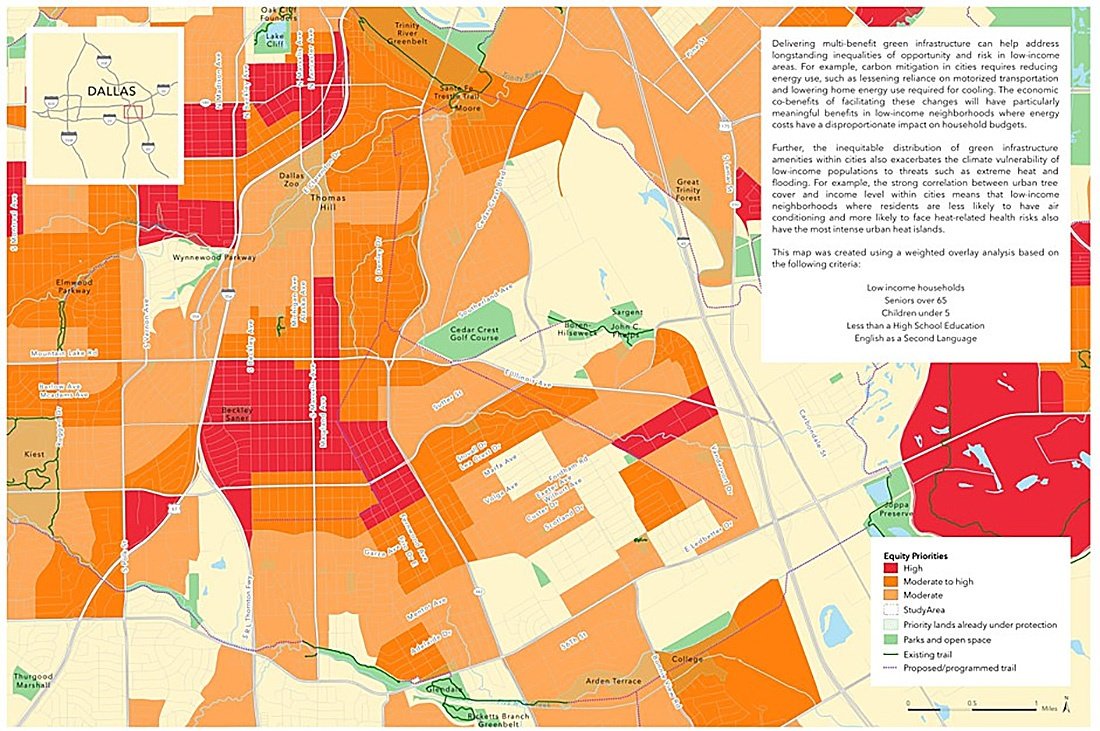 This also means they have the data they need to efficiently focus their efforts. The group is visiting the worst-affected areas to plant trees, which can reduce heat by up to 15° Fahrenheit. There are also other benefits to the locals – the lower temperatures can alleviate cardiovascular conditions and asthma, and the trees can encourage physical activity by making the sidewalks more inviting.

Over in Los Angeles, a similar tactic is being used to address litter. The Clean Streets Index, introduced in 2016, provides a cleanliness rating for every road in the city. To collect the figures, crews drive through L.A. recording instances of loose trash, weeds, bulky items, and illegal dumping, and the results give residents the statistics needed to convince their local representatives to deal with the mess. Through the program, the number of unclean streets has dropped by 82 percent.

Beijing’s Institute of Public and Environmental Affairs is also using a map to engage citizens and hold governments accountable, but on a scale far bigger than a city. The organization has combined air and water quality data from across the nation to build a searchable map of pollution in each region, allowing the people and policymakers to see which areas are in need of action.

While these initiatives show the value of maps to problem solving, there’s something else they have in common: they’re the products of incredibly time-consuming work, relying heavily on manual recording. Thankfully, IoT (Internet of Things) tools provide a way to make the data collection faster and less laborious.

Barcelona, for instance, has installed street lighting infrastructure with embedded sensors that monitor air quality, with the information then relayed to governing agencies. Similarly, cities such as Boston have solar-powered park benches that are capable to recording temperatures and radiation. These sorts of technologies can reduce the difficulty of creating and maintaining map-based data visualizations, making them more viable for approaching urban issues.

More than 150 years after Snow got to the bottom of London’s cholera outbreak, his strategy of addressing problems by structuring them geographically remains immensely valuable. And with new technologies producing better ways of gathering the information for these maps, Snow’s method is sure to stick around.