A brief history of bike sharing

A brief history of bike sharing

As we may have mentioned in the past, city population is on the rise. Smart city planners know that dense populations demand greener modes of transport, driving many cities to adopt bike share programs, but how are they working out thus far?

The noble bicycle – from the humble beginnings of the velocipede, to the modern objet d’arte – has become a permanent fixture of the urban landscape. The desire to use bicycles is alive and well among city populations. Plus, being green and being healthy are quite trendy. Unfortunately, not everyone wants to own and maintain a bicycle.

Enter the bike share, community bikes made for everyone. Beginning in the 1960s and spanning to present day, a multitude of bike share systems have come and gone. Here is a rundown of the business models, challenges, successes and failures every advocate should know.

You say you want a revolution?

The earliest version of the bike share we could find was the Witte Fietsenplan which took place the 1960s. Luud Schimmelpennink – considered the father of the bike share - helped paint set of white bicycles in Amsterdam and left them out in public for everyone to use. In reality, the program wasn’t a business offering, but a political statement of concern for pollution and against the growing number of cars in the city.

Due to their political affiliation, most of the white bikes were stolen, vandalized, or confiscated by police. A few years later, Schimmelpennink revised the idea as a more formal city program, but it was rejected by the city administration citing, “the bicycle belongs to the past”.

Though it took 20 years to revive, the concept was not forgotten. Two designers in Copenhagen, Wessung and Sadolin, invited Schimmelpennink to help organize a new bike share offering that could overcome the problems encountered by previous efforts. Their leading tactic: sustain funding by answering business objectives.

The new bike share, called Copenhagen City Bikes had its own set of problems at the outset (theft, adoption, funding). However, it eventually secured public funding (infrastructure interests) and private funding (insurance & advertising interests), which allowed it to flourish. Bycykler København featured fixed docks, where riders deposited money to unlock the bikes. Riders would then get their deposit back after returning the bike to a dock.

The deposit system worked, somewhat. Bycykler still suffered theft and vandalism – arguably from the complete anonymity involved in borrowing a bike. Though the clunky white bikes became synonymous with Copenhagen’s urban landscape, the city pulled the plug in 2012, and put out an open bid for an updated system. 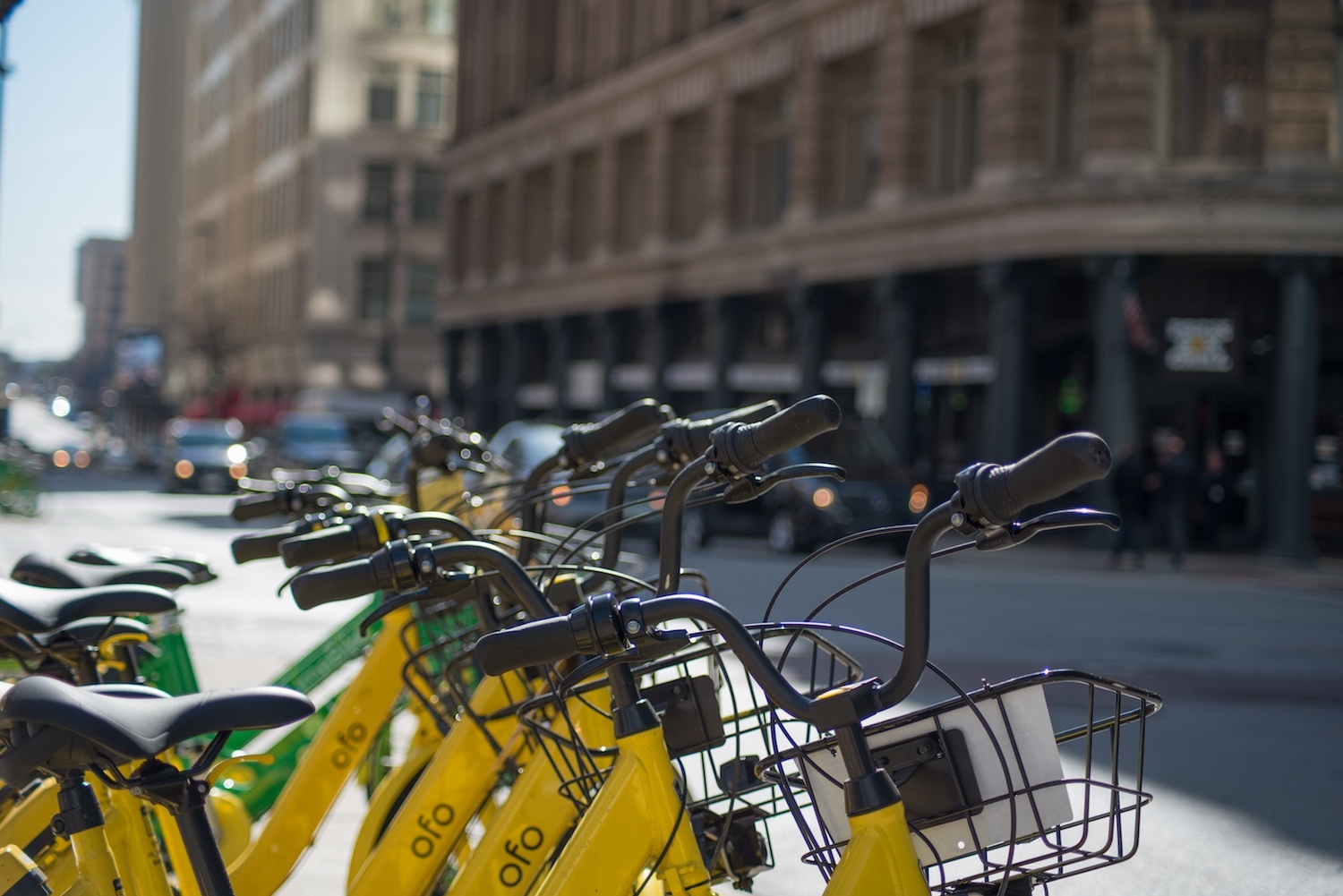 Through the years, the bike/dock system took hold in multiple locations across the globe. In 1998, Vélo a la Carte launched in Rennes, France. Like the Copenhagen project, the bikes were free to use, and had fixed docks in certain location. The docks were now equipped with magnetic card readers, so that riders could no longer borrow them anonymously.

Apart from any predecessor, the new program was a landmark evolution in non-traditional advertising. Vélo was funded and maintained by Clear Channel, built in cooperation with the city infrastructure. Not only would Clear Channel create ad space on the bikes themselves, but the city provided outdoor signage to the company in exchange for maintaining the bikes and the docks.

Vélo a la Carte was strategic on another level. Aware that most riders would use the bikes as part of a mixed transport routine, the majority of docks were built at bus interchanges or at park-and-ride facilities. This answered natural demand for riders to adopt green means of covering what’s called, “the last mile” in their commutes, while also raising the number of eyes that would see the advertisements on the bikes and docks.

Cost: Free (€23 deposit for card)
Parking/Activation: stands, unlocked with card
Use: 2 hours at a time
Number of bikes: 25 stations, over 200 bikes
Status: replaced in 2009 by LE vélo STAR

Notably, Vélo was the first of the modern dock-locked bike share programs that are abundant in cities across the globe. Most services have pay-per-use business models, and their names have been purchased by single entities (Citi Bike, Santander Cycles, Deezer nextbike), in order to grow brand awareness and top-of-mind in dense urban areas.

Free-range transportation: the dock-less bike share and the future

The need to return a shared bike to a smart dock is the biggest friction point for residents who want to utilize shared services. It was inevitable that companies like Gobee, oBike, Mobike, and others put modern smartphones, GPS and RFID to work to create a dock-less bike system. But without the docks, new problems arose.

The ability to pick up and leave a bike anywhere should make bikesharing effortless. Unfortunately, it makes the bikes highly vulnerable to abuse, and can cause riders to create mass dumps of bikes in terminal areas.

The convenience of such services is unquestionable, but companies that lose money from vandalism, theft, or simply can’t maintain a sustainable model for relocating bikes will expire – just as Luud’s white bikes did in the 60s.

The good news is, smart cities and smart companies alike already see the value of bike share systems. Both are working to identify the problems that cause abuse. Infrastructure will continue to develop in progressive cities, and part of that development will be aimed at how bike shares play a part in making cities more efficient – perhaps even taking a few tips from Luud Schimmelpennink.